Home Alumni 8 Things to Look Forward to in 2018 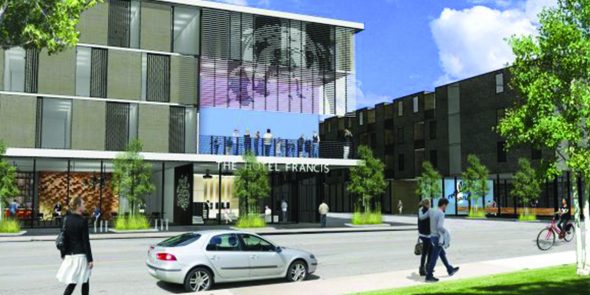 On January 29, Drake will launch two online graduate programs, offering a Master of Arts in Communication and a Master of Science in Education-Literacy Education. More information (and the application is available here) if you want to apply or invite others to become a Bulldog.

Under the direction of new head coach Niko Medved, the men’s basketball team will be exciting to watch this season. During the Paradise Jam tournament at Liberty University in Virginia, the Bulldogs beat Wake Forest (77-74), and Drexel (90-88). They are currently 4-3 and have caught the attention of college basketball analyst Andy Katz. The March Madness Twitter handle shared Katz’s article calling Medved a star.

The women’s basketball team comes off a successful season winning the Missouri Valley Conference and tournament titles, plus an appearance in the NCAA tournament–the 11th in program history. The Bulldogs were picked to win the MVC again in the preseason poll and had two student-athletes named preseason All-MVC.

A Des Moines native and Drake Relays champion, Brian Hardin is returning to the metro as the new Director of Athletics, starting December 11. Hardin’s work at Marquette University in the business development and external engagement areas generated more than $11 million annually. Hardin was part of five BIG EAST championship programs, which were the first BIG EAST championships won by their respective programs in school history.

Construction for the new Boys and Girls Club location at Drake University is scheduled to begin in the spring, with an estimated completion in fall–2019. The Club will be only the third in the nation to be located on a private university campus, and will provide K-12 students with after-school and summertime services.

5. Go All In for the fifth year

Save the date for the fifth annual 24-hour giving campaign, set for April 5-6, 2018, noon to noon. This event demonstrates the collective power of the Drake community through 24 hours of generosity and celebration, with 852 donors raising more than $150,000 for Drake during the 2017 campaign. Don’t miss any of the excitement or fun, be sure to like the Drake All In Facebook page for updates, and bookmark the All In website.

The Drake Relays Road Races is celebrating its 50th running by moving the race to a new date, relaunching a 10K, and returning the finish line to the blue oval. You can read more about their changes here, but the races have moved to Sunday, April 22 to kick off Drake Relays Week along with the Beautiful Bulldog Contest.

Register here now before prices go up on January 1, 2018!

7. Opening of the Ray Promenade

Construction has begun on campus for the installation of the Ray Promenade. The space is named after former Iowa Governor and Drake president Robert D. Ray, and renderings were unveiled at the ribbon cutting for the Ray Center in September. The beautiful new walkway that will replace 27th Street on the east edge of Collier-Scripps Hall. It will serve as a central gathering space on campus and add green space. Construction is expected to be completed sometime in 2018.

Three homes are being moved from 26th and 27th streets south of University Avenue to make way for construction of the new University Avenue Development. Announced in April, the new development will include a hotel, market-rate apartments, and urban-style row houses on the site. Initial conceptual renderings from the Des Moines-based developer also call for retail spaces and parking on the site, which boasts spectacular views of Drake’s iconic Old Main. Construction will begin on the hotel in the summer of 2018.

Only a Griffopotamus Will Do