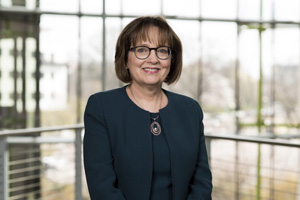 To say that Joan McKown, LW’83, has influenced the world of securities law is an understatement. From the longest-serving chief counsel in the Securities and Exchange Commission’s (SEC) Division of Enforcement to partner at the global law firm Jones Day, McKown has done it all.

Before she embarked on her impressive career, McKown attended Drake University Law School. The St. Louis-native says she was drawn to Drake’s faculty-student ratio and collegial environment.

“I had a wonderful experience at Drake,” McKown explains. “I loved the fact that you knew all your classmates and received individual attention from faculty. All the professors were top notch and helped to prepare me as a lawyer.”

During law school, McKown discovered her passion for securities law at a summer job at the Iowa Securities Division. The staff there encouraged her to pursue a career in the SEC.

After graduating from Drake Law School and clerking for Senior Judge J. Smith Henley of the U.S. Court of Appeals for the Eighth Circuit, she remembered that advice and sent her résumé to the SEC.

“My plan was to be there two years and get the lay of the legal market in Washington, D.C.,” McKown says. “Of course, I stayed a little longer because I enjoyed the work so much!”

McKown joined the SEC in 1986 as a staff attorney in the Office of the General Counsel and quickly moved up through the ranks. In 1993, she was named chief counsel of the Enforcement Division.

For 17 years, McKown played a key role in establishing enforcement policies, reviewed proposed actions before they were recommended to the Commission, and was involved in settlement negotiations for hundreds of SEC enforcement cases. She also oversaw the first-ever SEC Enforcement Manual.

Her tenure as the longest-serving chief counsel of the Division of Enforcement coincided with major events such as the Enron scandal. As a result, she spearheaded the enforcement-related policies of the Sarbanes-Oxley Act (SOX) of 2002.

“I believe during that time I helped to steer a number of SEC matters in the right direction, either through settlement or charging the right people with the right allegations,” McKown says.

In 2004, the SEC awarded McKown the Distinguished Service Award, which is the highest individual honor bestowed by the agency.

McKown left the SEC in 2010 to pursue private practice with Jones Day in Washington, D.C. Her focus has remained in enforcement defense, and she currently counsels corporations and financial service firms in various financial regulatory issues.

“I have been able to draw on my years of experience in the government to assist clients through a process that is hard to understand from the outside,” McKown explains.

In the legal community, McKown has chaired the D.C. Bar’s Corporate, Securities, and Finance Community Steering Committee and serves on the boards of trustees for both the SEC Historical Society and the Legal Aid Society of the District of Columbia.

She was named to The Best Lawyers in America for securities regulation, “America’s Leading Lawyers for Business” by Chambers USA, and “Most Influential Women in Securities Law” by Law360.

Reflecting on her success, McKown advises Drake Law students to be open to opportunities.

“In the beginning I certainly never intended to be a securities lawyer or work in the government, but both were great options for me,” McKown says. “Law students today should be thoughtful in their career paths, but also open to new possibilities.”

ArtSci NewsCAS NewsFaculty and Staff Accomplishments
May 3, 2018May 3, 2018

Professor to present at international conference on behavior analysis