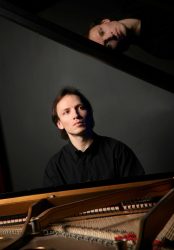 Roustem Saitkoulov will present the next concert of Drake University’s Keys to Excellence Piano Series at 7:30 p.m. Monday, January 29, in Sheslow Auditorium.

The concert is free and open to the public, and will include the following works:

Mussorgsky: Pictures at an Exhibition

Born in Kazan (Tatarstan, Russian Federation), Roustem Saitkoulov enjoys the great Russian School of piano. He entered the Kazan Conservatory at the age of 6; later he went on to study with Elisso Virsaladze at the Tchaikovsky Conservatory in Moscow, where he received his Soloist’s Diploma. He furthered his studies at the Munich Music High School.

His concerts and recitals take him all over the world: to Russia (International House of Music, Moscow and Philharmonia Hall of St Petersburg), China (NCPA Beijing and Guangzhou Opera House), Japan (Great Hall of the Metropolitan Art Space and Osaka Symphony Hall), Chile (Frutillar), Argentina (Teatro Colón and CCNK), Mexico (Palacio de Bellas Artes), Australia (Sydney Opera House), the United States, Canada, South Africa, and throughout many of the most important venues in Europe.

His music has been broadcast by France Musique, Radio Classique, DRS 2 (Switzerland), NDR Kultur (Germany) as well as on television programs in France (France 2, France 3 and Mezzo) and on the international European channel 3 SAT.

Saitkoulov is a regular partner of Maxim Vengerov.

The series is supported by Yamaha, West Music, Civic Music Association, and Drake University. For more information, contact Nicholas Roth at 515-321-5947 or nicholas.roth@drake.edu