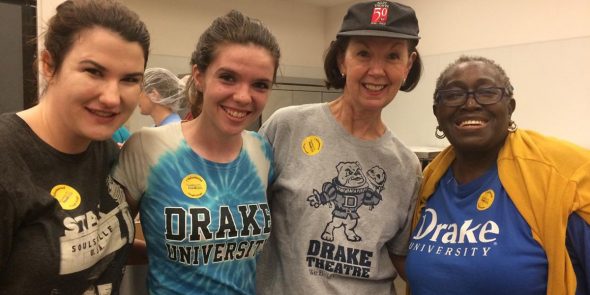 Scenes of the devastation caused by Hurricane Harvey were on the minds of Houston alumni as they gathered for their first-ever DU Good Day event, Sept. 16. Lynn Place, JO’74, arranged for the alumni group to volunteer at the Houston Food Bank long before anyone heard of the Category 4 storm. “The timing couldn’t have been more perfect,” said Place. “Everyone knew of someone affected and wanted to help.” Approximately 25 Houston alumni participated in the day of service to assemble backpacks with non-perishable food items as part of the food bank’s Backpack Buddy program.

The program distributes backpacks to school children in need every Friday to ensure they have access to food over the weekend. However, in the wake of Harvey, the backpacks took on an even greater significance. Schools shut down for weeks, meaning children who relied on school meals for food had nothing. “The Demands on the Houston Food Bank were greater than ever before,” said Place.

The Houston alumni group, representing graduating classes from 1970 to 2012, helped to pack more than 8,000 backpacks in four hours. While this was the first time any of the alumni had met, they had plenty in common. They shared stories about professors, dorms, and of course, Peggy’s. With more than 200 alumni in the Houston area, Place said she hopes the group can coordinate more events in the future.

Gina Larson (JO’92), a Drake alumna and the digital executive producer for KTRK-TV in Houston, participated in Houston’s DU Good Day and provided an account of what she experienced while broadcasting during Harvey. Prior to the storm, Larson left her home near the coast and moved into a hotel within walking distance of the news station. She wanted to be able to get to work, even if that meant putting on her boots and trudging through floodwaters. Once Harvey struck, Larson worked around the clock for days to broadcast live coverage of the floods. With emergency call centers inundated with calls, many were turning to the news station with urgent requests for help. The news station embraced its public service role and set up an interactive web page to help reunite people with loved ones and connect them to emergency resources. She said the page quickly filled with messages of struggle and support. “It [Harvey] was a worst-case scenario come true,” said Larson.

One of the most difficult parts of covering the storm was that the stories were often personal. She spent days away from home not knowing what her loved ones were facing. Thankfully, most of her family and friends weathered the storm with no significant damage or issues. After things settled down, she said the city went into recovery mode and pulled together to help those in need. “DU Good Day came at a perfect time,” said Larson. “It was an opportunity to come together with like-minded individuals from Drake and help the greater community.”

Bulldog Buildings and Memories they Contain