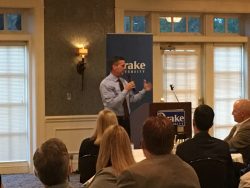 Coyle shared how his five years at Drake affected his life and helped shape the career path he decided on. “When I graduated from Drake, I had every intention of being a high school English teacher,” Coyle shared, “but then wondered how I could make more money, which led me to athletics.” Athletics was not a foreign idea to Coyle, as he played on the football team during his time at Drake.

Coyle was transparent with the crowd that his journey prior to becoming the Director of Athletics at Minnesota, and in his first few months at the University have not been easy. However, Coyle seeks guidance from in his mentors, many of whom are Drake alumni and former classmates.

Throughout the year, the Drake University Twin Cities Regional Alumni Board (RAB) plans various programs to keep alumni engaged with the University. “This event is mirrored after a professional speaker series event that takes place in Des Moines in the fall and spring,” said Amelia Klatt, assistant director of alumni relations, “the event was so well received, we would like to continue this event in the Twin Cities and other locations around the country.”

The Drake Bulldogs Men’s Basketball team will be heading to Minneapolis to take on the University of Minnesota Golden Gophers on December 11 at Williams Arena. Learn more about attending the pregame gathering.