Home Alumni The Gift of Time

The Gift of Time

For Kyair Butts, JO’11, AS’11, being a great teacher to inner-city youth means dedicating every possible moment to the kids, and reveling in successes big and small.

It’s a sunny day at Calverton Elementary and Middle School in Baltimore, Maryland. The temperature at recess is 75 degrees with a light breeze, and Kyair Butts, JO’11, AS’11, takes time to admire the “big cotton candy clouds” in the sky above the blacktop where children play.

“It’s one of those days where, if you had one during your time at Drake, you’d think, ‘Maybe I don’t have to go to sociology class, I can just stay outside and play ultimate frisbee,’” Butts says. 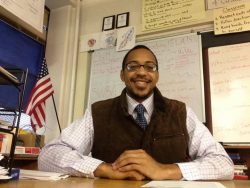 Now in his fifth year at Calverton, the Des Moines native says he’s found his purpose—dedicating as much of his time as possible every day to providing a safe and exciting learning environment for students in this low-income neighborhood where unemployment, crime, and addiction rates are above the city average.

“Coming from Des Moines, a lot of us are ‘haves,’” says Butts, whose students call him Mr. K. “We may not have as much money in our bank account as we wish, but I always got to go home to a house that has central air and heat—and I still do. Not all of my students are afforded that ability. Some of them live in, or near, homes that are subject to collapse. We need to advocate for these students because education should be a right and not a privilege.”

Less than a decade ago, the state of Maryland classified Calverton as a “persistently dangerous school” due to a high incidence of violent offenses. The school was removed from the list in 2008, and the school’s climate has improved but challenges remain. As a federal Title I school, each of the 680 students receives free lunch. In his relatively brief term as a teacher, Mr. K has made a tremendous impact, helping to develop and coach a debate team that won a city championship two years in a row, forming a journalism club, coaching a kickball team, leading a boys’ sports and mentoring group, and co-mentoring a female empowerment club. 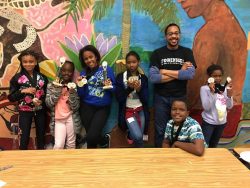 “Kyair is an amazing person who truly cares about his students,” says Renee Robinson, administrator at Calverton. “He doesn’t just teach Monday through Friday; he has also dedicated his weekends to the children. One Saturday a month, he takes some of his top students out for Books and Brunch, where students each read a book, and they discuss them over brunch. At the end of the day, Mr. K lets them take as many books home as they want. That’s just one way he has dedicated himself to the betterment of the children—not just within school hours but every day.”

Butts’ passion for teaching is relatively new. Through most of his time at Drake, he envisioned a career in law. He majored in psychology and news/internet journalism, and poured the greatest amount of energy into the undergraduate mock trial program, which he coached during his junior and senior year. During his latter, he was placed on the mediation team, which ranked in the top 10 nationally. He won two All-American awards and landed himself a scholarship to Drake Law School.

He was on track toward fulfilling his dream of becoming a lawyer, but he found that he was most fulfilled as a coach for first- and second-year students on the mock trial team. That’s when he caught the bug for teaching. His faculty advisor, Associate Professor of Journalism and Mass Communication Jill Van Wyke, was surprised—but not too surprised—when he showed her application materials for Urban Teachers-Baltimore, which trains new educators to work in urban districts.

“Like the greatest journalists—and teachers—he had a desire to figure out why things work or don’t work, and he had a sense that the world would be a better place if people just knew,” Van Wyke says. “He had a commitment to community and to a better civil society. I’m just in awe of what he’s doing today, and I couldn’t be more proud of him.” 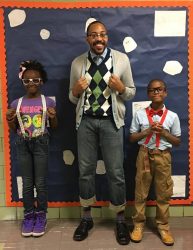 Butts spent a full year as a resident-in-training under another teacher at Calverton; he’s now entering his fourth year as a teacher of record. Colleagues say one of his most meaningful contributions to the classroom environment came in April 2015, when 25-year-old Baltimore resident Freddie Carlos Gray died in the hospital from spinal injuries a week after police took him into custody. Controversy around the circumstances involving Gray’s death shook the nation, and particularly in the city of Baltimore. Mr. K helped students at Calverton find a safe and positive outlet for their feelings.

“Students wanted to have a voice,” Robinson says. “So, with Mr. K’s help, we launched a school-wide initiative called ‘It’s Debatable’ that taught students to apply facts and evidence to their arguments. He taught students that you’re not always going to agree with things that happen in your neighborhood—and the best way to respond is to articulate disagreement in positive ways, backed by the best available evidence.”

While he flourishes at Calverton, he’s also giving back to Urban Teachers; he’s welcomed two UT residents-in-training into his classroom, and he serves as a lead mentor for the organization’s summer training program for new teachers. This year, he’ll teach a course on the foundations of urban education at Johns Hopkins University, which has a partnership with Urban Teachers to train new teachers for public schools. 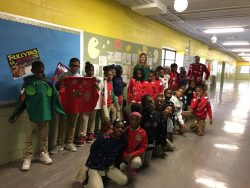 “He’s 100 percent invested in his students—and not in a way that seeks praise but instead seeks development of his students,” says Japera Parker, assistant director of Urban Teachers-Baltimore. “We’re very lucky to have Kyair at Urban Teachers, and more importantly, the students at Calverton are lucky to have such an invested teacher. We’re happy that he found us.”

With so much going on, it’s remarkable that Mr. K finds time each day to take a deep breath and look up at the sky. He says Drake may have something to do with his tendency to slow down.

“What I’ll always appreciate about Drake is the precious commodity of time,” he says. “My professors always had time for me—they were down to earth, accessible, relatable—and in my mind, that’s the kind of teacher every child deserves. Now I try to be the kind of teacher who really makes time for my own students.”

The Sum of Our Parts