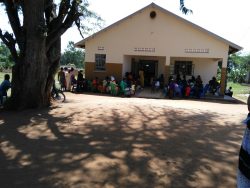 In 2007, Drake alumna Mary Schwab was among the first group of Drake students to board a plane to the East African country of Uganda. In the ensuing decade, her memory of that trip had begun to fade—until January 2017, when she had the opportunity to return.

Schwab, BN’08, was among a group of 11 Drake alumni, faculty members, and administrators to celebrate the 10th anniversary of Drake’s partnership with Makerere University Business School (MUBS) in Kampala, Uganda. She found that her class visit, all those years ago, had formed the kernel of a partnership that has grown more than she could have imagined.

“I am just blown away by how the program has changed and what it’s become,” Schwab said. “It’s beyond any single person, any single group who’s ever been there—it’s so broad that, in a way, it’s almost grown beyond Drake itself. It’s this massive partnership where students, professors, and community partners are empowered to take on projects that fit their passions and meet the needs of the Ugandan people.” 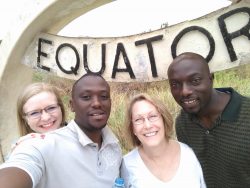 The partnership, brought to life by Jimmy Senteza, associate professor of finance, began as a single, three-week class to study sustainable development at MUBS. Today, more than 200 Drake students have traveled to Uganda, engaging with Ugandan students on sustainable service projects, including the creation of a health clinic; a school computer lab; and Dream On, a club aimed at empowering young girls. Faculty members across myriad academic disciplines have led trips, each helping to evolve the partnership.

Sixteen students and three faculty members departed for MUBS on May 16, officially sending the partnership into its second decade. While there, they’ll hold a celebratory groundbreaking for the second phase of the health center they helped to create; for the first time, the center will have a maternity ward and dedicated 24/7 on-site housing. They’ll also test out a braille printer, purchased for the SURE Prospects Primary School, where typically-abled children learn alongside children with a variety of special needs. [Follow their experiences online.]

“Our students have learned so much from the faculty and students at MUBS, and from the people of Uganda,” said Deb Bishop, associate professor of practice in management and international business. “At the same time, they’ve done a terrific job of working with community organizations to identify their needs and provide assistance in a way that is thoughtful and sustainable.” 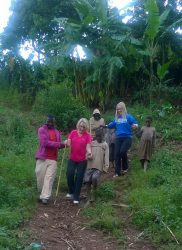 In return, MUBS students and faculty have visited Drake’s campus four times to explore leadership, business, and teaching methods, and to share best practices from their country.

This winter’s 10th anniversary celebration was held in the upscale Protea Hotel in downtown Kampala. Annique Kiel, executive director of global engagement and international programs, said the occasion was attended by hundreds of Ugandans from a wide range of professions and socioeconomic backgrounds, all of whom have worked with Drake over the years. They included nurses who work at a local nonprofit clinic where students learn about HIV/AIDS prevention; farmers who enjoy visiting with students about the rural economy; the hotel’s owner, one of the nation’s most successful entrepreneurs; and a judge who sits on Uganda’s highest court.

“I walked into the room and it took my breath away,” Kiel said. “It was this sea of partners. To hear them share what being part of the program has meant to them was honestly incredible.” 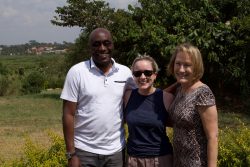 Ten years after she graduated, Schwab was thankful for the opportunity to reconnect. She returns to her life in Chicago with a recognition that she’s part of a legacy that will continue to grow and evolve, both at Drake and overseas.

“The trip was a really great reminder that, outside of my day-to-day job, my set routine, there’s this really amazing project that I feel I’m a part of,” Schwab said. “And I’m part of that family who’s helping to keep this project going and running for future students who can have these experiences.”

The Gift of Time

Golden Reunion Offers a Glance into Drake’s Past