Home Alumni Golden Reunion Offers a Glance into Drake’s Past

Golden Reunion Offers a Glance into Drake’s Past 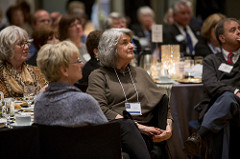 During the Drake Relays, the University welcomed more than 40 alumni back to campus for the Golden Reunion, a celebration of 50 (or 60!) years as Drake alumni. For some, this was their first trip back to campus since graduating; for all celebrants, it was a way to reconnect with the University and with friends from the past. For attendees Jim Devine and Paul Davis, their return to the University was just another chapter of a lifelong friendship that began at Drake.

Jim and Paul were roommates in a brand-new Carpenter Hall during their first year at Drake. As Paul recalls: “We were both only children, but we came from different backgrounds. Jim was an outstanding football player who had some of the worst athletes foot I’ve ever seen. I still remember the clouds of powder that filled our dorm room. That being said, making good grades was what was most important to the both of us. I suppose he was also a little more studious than I was.”

Fast forward 60 years and the pair has remained in touch and often reminisce about their time at Drake. Jim recalls: “When I was here as a student, I was worried that I might be missing out from things a larger school might offer me. When I graduated and conversed with my military buddies, I realized I didn’t miss a thing. I believe I had more opportunities here, because of the smaller class sizes. This is a great school and when I come back it seems like Drake is doing really well. The campus looks tremendous to me!”

Throughout the Golden Reunion, attendees were honored at various activities including a 50-year induction, a 60-year anniversary

recognition, several celebratory receptions including a dinner in Olmsted that brought together over 150 friends and alumni of Drake. Golden Reunion attendees were also given tours of Des Moines and Drake’s campus, and the opportunity to go “back to class.” This activity allowed them to step into the classroom again and learn from some of Drake’s finest faculty. Among the classes attended were an infectious disease seminar, taught by Darla Eastman; a performance by Karla Kash’s students, and a lecture by Dennis Goldford titled, “The Elections of 2017 and 2018: A Postmortem and Premortem.”

To explore photos from the Golden Reunion you can visit our Flickr gallery.