The Drake University women’s basketball team capped a historic season with its sixth MVC Tournament title and the program’s first trip to the NCAA Tournament since 2007.

Led by Head Coach Jennie Baranczyk, the Bulldogs finished the season with a 28-5 overall record after cruising to the Missouri Valley Conference regular season and tournament titles with a perfect 18-0 league record. Their loss in the first round of the NCAA Tournament snapped a 22-game win streak that was the longest in program history and the second-longest active streak in the NCAA.

The team’s on-court performance was matched by exceptional academic accomplishments. Caitlin Ingle made a SportsCenter highlight reel with a late-game jump shot that forced the Bulldogs into overtime during their MVC Tournament championship match-up against University of Northern Iowa. The same week, she was named tournament MVP and the Missouri Valley Conference Scholar-Athlete of the Week—the second of the season for Ingle, a psychology major with a 3.86 GPA. Across all sports, Bulldogs earned MVC Scholar-Athlete of the Week honors a total of 14 times during the season. Additionally, the women’s team logged more than 1,000 of community service. 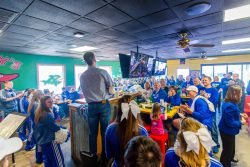 Hundreds of Drake alumni, faculty, staff members, and other fans traveled to Manhattan, Kan., to cheer on the Bulldogs as they took on Kansas State in the NCAA Tournament. Former Drake men’s basketball standout Adam Emmenecker, BN’08—who led the Bulldogs to a sweep of the regular-season and MVC Tournament titles in 2007-08—posed for a selfie with the team during warm-ups prior to the game. The NCAA noted the crowd’s enthusiasm, and local sports reporter Andy Garman observed the fans rivaled that of the home team.

Drake took an early lead at the start of the game, and hung within striking distance of the Wildcats throughout, but ultimately fell short. [Go behind the scenes on gameday with this recap.]

“It was not how we wanted the game to go but what an incredible environment,” Baranczyk said after the game. “I thought there were a lot of Kansas State fans and we also brought our fans with us so I thought that was great. For a first-round tournament, that is huge to be able to have that… I am really proud of our team and I am really proud of our senior class for taking us on this amazing journey this season.”

The seniors—Wendell, Ingle, and guard Cortni Rush—had much to be proud of as they finished their careers at Drake, and Baranczyk predicted even better things for the Bulldogs moving forward.

“We are still going to continue to learn, grow, and get better,” Baranczyk said. “The best is still coming but the legacy that the senior class has left has been phenomenal.”