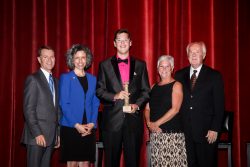 Praised by community members in southwest Iowa, Bohling leads a number of community projects including Holiday Mail for Heroes, which distributes holiday cards to military veterans and troops around the world.

Among his responsibilities for the Holiday Mail for Heroes project, Bohling organized and secured local mail drop sites and worked with limited resources to buy greeting cards and supplies. He used local media and church bulletins to enlist help from the community while researching and receiving a grant to help with expenses. Bohling hosted card-signing events with 4-H, churches, and civic organizations and in the seven years since starting the project, Bohling has collected over 14,000 holiday greetings for distribution to veterans and troops around the world.

Bohling also organized efforts to revitalize a local recreation area. After securing three grants to help with funding, Bohling and his team completed the community improvement project and hosted a re-opening celebration. Since joining 4-H, Bohling has organized and managed their concession stand at the Adair County Fair. Under Bohling’s leadership the stand has grown and profited each year.