Drake University Department of Theatre Arts is opening their 2016-2017 season October 6 with the controversial, religious drama, Doubt: a parable by John Patrick Shanley. 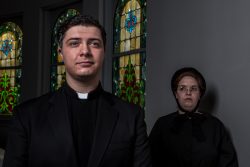 Winner of the Tony Award for Best Play and the Pulitzer Prize for Drama, John Patrick Shanley’s Doubt: a parable examines how far one is willing to go in the name of Truth. Sister Aloysius (Ruby Carlson) is the no-nonsense principal of St. Nicholas School in New York in 1964. She suspects a priest, Father Flynn (Zachary Decker), may have had an inappropriate relationship with one of her students. In the middle is the child, represented by his mother, Mrs. Muller (Maddie Jones) and the child’s teacher, Sister James (Grace Sopko).

While the show is set in 1960’s New York, according to sophomore musical theatre major Grace Sopko, the show has many universal themes.

“This piece is so timeless,” Sopko said. “The subject matter and the themes throughout the show are not specific to the time period or the characters, they are something that everyone deals with at different points in their lives.”

As the plot develops, the audience will hear both Father Flynn’s and Sister Aloysius’s side of the story, but the final verdict is left up to interpretation.

“It’s such an interesting piece,” senior musical theater major, Ruby Carlson said. “Depending on who you end up siding with, you could come out of it with a completely different experience than somebody else who didn’t side that same way.”

Is Father Flynn guilty? How far will Sister Aloysius go to prove her suspicions? In this taut, four-person drama there are no easy answers. There is only Doubt.

Doubt: a parable runs Thursday, October 6 through Sunday, Oct. 9 in the Coleman Studio Theatre of the Harmon Fine Arts Center. Performances will start at 7:30 p.m. on Oct. 6-Oct. 8 and 2 p.m. on Oct 9. Admission is $8 for adults and $6 for students and senior citizens. Tickets are available starting Thursday, Sept. 22 at the Fine Arts Box Office as well as online. Visit http://drake.edu/fineartsboxoffice/ or call 515-271-3841 for more information.