Lee Jolliffe, associate professor of journalism in the Drake University School of Journalism and Mass Communication, was the first-ever guest editor of Journalism History.

Founded in 1974, the journal is the oldest in the United States devoted to the history of mass media, with an international paid circulation of about 500.

Jolliffe edited the spring 2016 issue of the academic journal, which carried the theme of “Adventure Journalism in the Nineteenth Century.” Articles featured: 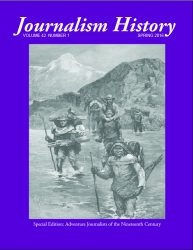 • Frank Leslie’s explorer team members who were lost (and found again) in Alaska;
• The circle-the-globe shakedown cruise of a U.S. Treasury cutter that found itself leading the Battle for Manila Bay with journalists loading the big guns on deck;
• Teresa Howard Dean’s blythe intrusion into tribal life after the massacre at Wounded Knee;
• Sir Henry Morton Stanley’s adventures on the prairies, prior to his work with David Livingstone;
• A new look at the three stories of “The Open Boat,” with photos of the ill-fated SS Commodore that sank leaving author Stephen Crane adrift on the Atlantic.

Jolliffe gathered content for the issue through a call for papers at The Independent Symposium on the 19th Century Press, the Civil War, and Free Expression, held annually in Chattanooga, Tenn. Jolliffe serves on the Symposium’s steering committee.

Journalism History is published four times a year by the E.W. Scripps School of Journalism at Ohio University. Most of the subscribers are university libraries, about half of which are outside the United States. The journal is also published digitally by EBSCOHost. The editor, Mike Sweeney, said he is open to suggestions for special issues in the future.