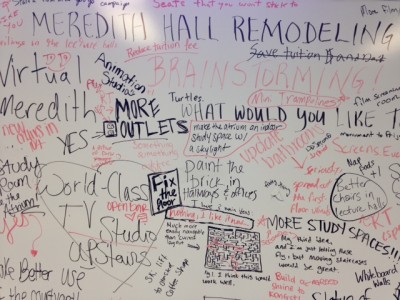 The students have spoken. We put white boards up around the building and asked, “What would YOU like to see in a remodeled Meredith Hall?” The responses are below.

Next step: We’ll be holding a few focus groups of students to get more detailed feedback on current building use and input on future needs. The focus groups are scheduled for Friday, April 22, 9-10 a.m. and 3-4 p.m. in Mer. 124B. If you can’t make it but would like to provide input, email Dean Richardson at kathleen.richardson@drake.edu.

Congratulations to the SJMC students who were recently elected to the 2016-17 Student Senate: PR major Thalia Anguiano was elected Drake student body president, becoming the first Latina elected to the position and the first woman in four years. PR student Grace Rogers was elected as a senator-at-large and News-Internet major Beth LeValley was elected SJMC senator.

The latest edition of Urban Plains  — the award-winning multimedia website produced by the School of Journalism and Mass Communication’s magazine, news and digital media production students — has been live for several weeks and is being continually updated now.

A fun feature of this year’s Urban Plains: Urban Mash Up, in which local musicians from diverse backgrounds and musical traditions are invited into the Turner Jazz Center studio, left to experiment for an hour, and then their creative collaboration is recorded.

SJMC magazine professor Jeff Inman was featured prominently in an article on MediaShift, a website that bills itself as the “premier destination for insight and analysis at the intersection of media and technology.”  The article, entitled “Teaching Magazine Students More Than Magazines,” examines the changing nature of magazine journalism education and the challenges facing teachers attempting to replicate in the classroom the breakneck nature of online journalism.

Anyone interested in working on the staff of student-run Drake Political Review next school year can apply at this link. Also send your resume to Editor Sarah LeBlanc at sarah.leblanc@drake.edu. Deadline is Friday, April 22.