Professor Chris Snider is hosting a workshop Saturday, March 5, where you’ll have a chance to get hands-on with some new digital media tools.

Specifically, you will have the chance to…
• Shoot, edit and post 360-degree video using our 360 camera
• Test out our Oculus Rift virtual reality gear
• Try out an iPad pro for editing video and creating illustrations
• Fly a drone
• Gets hands-on with Google Cardboard and the View-master VR kit (a cheap way for you to dive into VR)
• Test a gimbal for silky smooth video from your smartphone
• Try out all of my smartphone video gear

To sign up, contact Shari Tenney in the Drake School of Journalism and Mass Communication office at shari.tenney@drake.edu or 515-271-3194. Email chris.snider@drake.edu if you have any questions.

The annual J Term Fair will held Monday, March 7, from 4:15 to 6:16 p.m. in Parents Hall. There will be information about both on-campus and off-campus classes, housing, finances and registration.

Quick, fill out a scholarship application! They’re due tomorrow

Stop by the table outside the SJMC dean’s office (Mer. 118) to pick up applications for the Meredith Corporation Scholarships for magazine media students; the Frank Miller Scholarship for students who exhibit achievement in web-based graphic design, and the Professor Richard Tapscott Reporting Award. The Tapscott Award is named after a late SJMC reporting professor and recognizes student journalism work, done either in class or on the job, that reflects the values Rick tried to instill in his students: curiosity, accuracy, integrity, humanity, public accountability and aggressive reporting. All of these scholarship awards are in addition to any financial aid the student is already receiving.

Put it on your calendar: SJMC student recognition event

Urban Plains celebrates another award,
ramps up for 2016

Urban Plains snared another award when it was named Best of Show in the BEA Festival of Media Arts interactive multimedia competition. It was yet another recognition for the 2015 staff of Urban Plains, led by Kayli Kunkel. The publication earlier won multimedia story of the year in the Associated Collegiate Press contest, best online magazine in the AEJMC contest, a bronze Telly, and eight Iowa College Media Association awards (including best online edition). 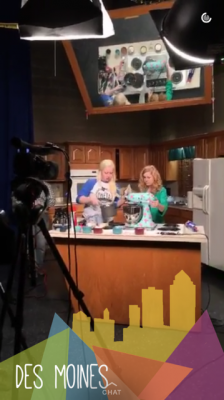 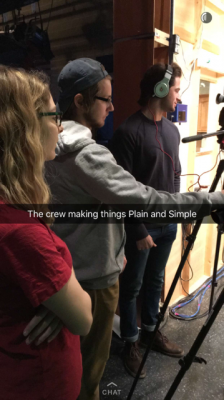 Urban Plains is produced in a senior capstone of broadcast news, radio-tv producing, magazine and news-Internet majors. Last spring was the first time all four majors were combined in one capstone.

The 2016 staff of 40 students, led by General Manager Hannah Bruneman, a magazine major, is off to a strong start. The depth of talent on the staff promises another year of first-rate multi-platform storytelling. On Sunday, a crew used Snapchat to chronicle the taping of a cooking show. You can follow @UrbanPlains on Snapchat, Instagram and Twitter, and like them on Facebook.

Senior Public Relations majors are hard at work on their capstone project for this year. The four teams are working to create comprehensive, strategic, smart public relations plans for the City of Manning, Iowa. They’re applying what they learned in their original research last semester to the development of these plans, with the client pitches coming up at the end of March. Teams are in “crunch time,” developing every tactic they recommend so the client has all it will need to implement the plans. That means late nights huddled around computer screens designing collateral pieces, careful editing of final books, and overall intense focus to present what are sure to be outstanding professional campaigns next month.

The advertising seniors are collaborating with local agribusiness giant DuPont Pioneer to create a campaign for their senior capstone.

Yesterday work sent me to go play with some sled dogs. It was adorable. #Alaska

Free Lecture: "The End of the Commodities Super Cycle"