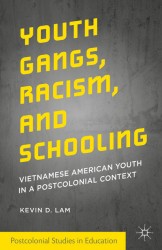 Kevin Lam, assistant professor of urban and diversity education in the Department of Teaching and Learning, published “Youth Gangs, Racism, and Schooling: Vietnamese American Youth in a Postcolonial Context” (Palgrave Macmillan). The book examines Vietnamese American youth gang formation in Southern California, with an emphasis on the experiences of those heavily involved in the 1990s.

Lam traces the genealogy of the Vietnamese American youth gang phenomenon as part of the conflict in Southeast Asia. He describes the consequences of war and migration for youth as well as their racialization as “Asian American” subjects.

Grounded in the critical narratives of three gang members, Lam addresses themes of racism, violence, class struggle, style, and schooling in an era of anti-youth legislation in the state and nationally. In this dehumanizing context, Lam frames Vietnamese and Southeast Asian American gang members as post-colonial subjects, offering an alternative analysis toward humanization and decolonization.

Lam received his B.A. in Sociology and specialization in Asian American Studies from UCLA, M.A. in Social Foundations of Education from CSU-Los Angeles, and Ph.D. in Educational Policy Studies (Social and Cultural Studies) from the University of Illinois, Urbana-Champaign. He is the director of the Social Justice in Urban Education Program in the School of Education. Follow this link for more information on the book.