When the Office of Alumni Relations moved to the Alumni House in January 2014, the walls of an historic home provided a gallery for showcasing Drake history.

“We had the opportunity to fill a house with items that would spark nostalgia among visiting Drake graduates from many different generations,” says Blake Campbell, director of alumni relations.

The house was built in 1901 by Chancellor William Bayard Craig and has since been home to presidents, a women’s dorm, the Chi Omega sorority house, the International Student Center, and most recently home to the American Judicature Society headquarters. The team was tasked with channeling that history and filling the house with memories. So, they put out a call to alumni asking for memorabilia.

“Making these pieces of Drake history part of the Alumni House ensures people will continue to understand and celebrate the role our graduates have played in shaping their alma mater,” Campbell said.

The Office of Alumni Relations has received many special items from alumni across the nation, with personal stories tied to each piece.

The Drake football team doesn’t play Grinnell College this year, but they used to battle the Pioneers each year in a football series tradition. The two teams were motivated by the prospect of taking home the coveted “Old Oaken Bucket” traveling trophy.

“Our games with them were always one of the most anticipated games of the season and one of the biggest rivalries in the state,” says Drake historian Paul Morrison.

The worn bucket has years and game scores scrawled in the oak. A “D” and a “G” are carved on opposite sides of the worn oak. When a team won, they took the bucket home and were responsible for noting the year and score on their side of the bucket.

Joy Giudicessi, FA’72, assistant director of alumni relations, is collecting the items and working with the alumni relations team to decide where they should be placed. She thought it was serendipitous that within a week they received the bucket and a picture of the 1896 football team – the first team to win the bucket.

When alumna Sharon “Sherry” (Clark) Wilkinson, ED’68, GR’75, heard the call for memorabilia she thought of her father’s infamous basketball collection. Virgil Clark fell in love with Drake basketball while his daughter was attending the University. He got to know Dolph Pulliam and Coach Maury John, and with growing admiration Clark become a die-hard fan.

Clark purchased 40 sets of season tickets at one point, sharing them with employees and anyone who wanted to attend. He would charter planes to attend away games, and never missed a game, even if it meant trudging through a snowstorm. Clark even hosted the Drake basketball team every year and the team would present him with a signed basketball as a thank you at each dinner.

“He had special shelves made for his basketball collection and you weren’t supposed to touch them,” Wilkinson said.

Wilkinson chose to donate the basketball signed by the team from the famous 1968–1969 season, the year the Bulldogs went to the Final Four of the men’s NCAA Men’s Basketball Tournament. Wilkinson knows her father would want Drake to have the basketball so all fans can enjoy the piece.

Drake University was founded in 1881, and the first graduate was James E. Denton, a transfer student from Oskaloosa, who received a 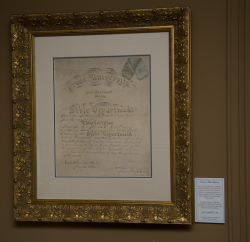 B.D. in June 1882. That made Denton Drake’s very first graduate. A few decades ago—the date is not known—Denton’s family found his diploma and donated it to the University. The diploma sat in the basement of the Kinne Alumni and Development Center before its significance was discovered. The diploma now hangs proudly in the Alumni House’s fireplace room.

“I think the cool thing about memorabilia is that it can tie history, tradition, emotion, and experience all together,” Campbell said. “Memorabilia can be a piece of art. It says something and means something different to everyone that interacts with it.”

The house is still accepting memorabilia. If you are interested in making a donation, contact Blake Campbell at 515-271-3077 or blake.campbell@drake.edu.

Learn more about the alumni house and review upcoming events to plan your visit.

Browse this Flickr gallery for more images of memorabilia at the alumni house.