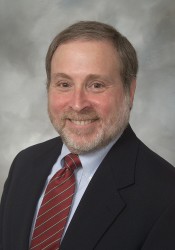 The Harkin Institute for Public Policy and Citizen Engagement at Drake University announced today that Professor Dennis Goldford has been named the Institute’s first Flansburg Fellow.

Goldford, a professor of political science at Drake University for nearly 30 years, is one of the country’s foremost experts in presidential politics, the intersection of religion and the U.S. Constitution, and Iowa’s first-in-the-nation caucuses.

As Flansburg Fellow, Goldford will examine the modern media’s coverage of American politics, changes in media coverage, and the implications of those changes for American democratic processes. His work will also focus on the Iowa caucuses, including contributions to the Caucus Blog on the Harkin Institute’s Iowa caucuses website explaining the caucus process and discussing the “on-the-ground” political environment in Iowa leading up to the caucuses.

Since joining Drake’s faculty in 1985, Goldford has established himself as the go-to analyst for political reporters around the world, offering commentary for local, regional, national, and international news outlets.

“The Harkin Institute is delighted to name Professor Goldford as the Flansburg Fellow,” said Marsha Ternus, director of the Harkin Institute for Public Policy and Citizen Engagement. “He brings to the Institute a strong reputation as a nonpartisan authority on presidential politics and is widely recognized as an insightful expert on the Iowa caucuses. Dennis Goldford’s longstanding commitment to increasing public conversation about the political process epitomizes Jim Flansburg’s commitment to informing Iowans about Iowa politics and manifests the Institute’s commitment to engaging citizens in electoral activities.”

Goldford is co-author, with retired Drake professor Hugh Winebrenner, of the widely cited The Iowa Precinct Caucuses: The Making of a Media Event, (3rd ed.), which chronicles the origins of the caucuses and their evolution into one of the most widely publicized events of the presidential campaign season. He most recently wrote The Constitution of Religious Freedom: God, Politics, and the First Amendment, which examines the First Amendment of the U.S. Constitution and the nature of the protections it offers with regard to religion and religious freedom.

The Flansburg Fellowship was established through the generosity of an anonymous donor in honor of long-time political reporter Jim Flansburg. In the 1960’s, Flansburg gained prominence for his reporting on Iowa politics for The Des Moines Register, Iowa’s largest newspaper. By 1971, he was the Register’s chief political writer, as well as a columnist for the paper. For the next 40 years, Flansburg was known as one of Iowa’s top sources for political journalism through his work as a reporter, editorial page editor, and columnist.  Described as “brilliant in his knowledge of Iowa politics,” Flansburg retired from the Register in 1997.

This fellow position recognizes and honors the individuals who dedicate their careers to informing Americans about pressing national issues and particularly those who have been instrumental in expanding knowledge of Iowa’s unique first-in-the nation caucuses. The work of the Flansburg Fellow advances the Harkin Institute’s mission to provide nonpartisan, high-quality information; enhance active and informed citizen participation in electoral processes; and promote public conversation about government and policy. These issues transcend partisan political boundaries; they shape and inform understandings of political community and citizenship for future generations.

“I am both honored and humbled by the Harkin Institute’s invitation to serve as a faculty fellow and, in particular, by my appointment as the first Flansburg Fellow,” Goldford said. “Jim Flansburg’s knowledge of Iowa politics sets a high bar for journalists and academics who seek to follow in his footsteps. Whether discussing and researching aspects of the Iowa caucuses, the dynamics and forces that shape American electoral politics, the impact of contemporary mass media on the possibility of civil discourse, or the position of religion in a liberal democracy, my overarching goal is the same: to empower citizens by fostering and contributing to our understanding of our system of government and politics.”

The Harkin Institute was launched at Drake in summer 2013 to coincide with the announcement that U.S. Sen. Tom Harkin would transfer and eventually donate to Drake the historical papers and materials from his 40 years of service in the U.S. Congress.

Also in 2013, Drake dedicated the newly constructed Drake University Archives in Cowles Library to store the historical documents from Sen. Harkin and other important figures, including former Iowa Gov. Robert Ray. Since its dedication, the University Archives has added the political papers of former Congressman Neal Smith and has established the Iowa Caucus Collection. The Institute announced in 2014 that Hope Grebner was hired as political papers archivist and assistant professor of librarianship at Cowles Library, a role in which she will steward the storage and public display (including digital access) of the Archives’ political documents.