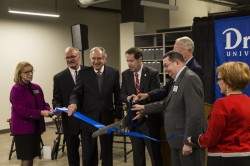 On Dec. 6, Drake University officially dedicated the Drake University Archives. U.S. Sen. and Mrs. Harkin attended the celebration in the newly constructed space on the second floor of Cowles Library.

Thanks in part to a lead gift of $1.5 million to the distinctlyDrake campaign from Stine Seed Company and its CEO, Harry Stine, construction of the 6,000 square-foot center began this summer. The new space, located on the second floor of Drake University’s Cowles Library, contains glass walls, a public viewing space, work areas, and scanners to allow items to be converted to digital formats. Additional funding for the construction of the space came from the Polk County Board of Supervisors with a generous $450,000 grant.

“On behalf of Drake University, I’d like to extend our profound thanks to Harry Stine and the Polk County Board of Supervisors, whose gifts made this center possible,” says Drake University President David Maxwell. “The Ray and Harkin collections present an enormous opportunity to advance civil discourse as well as help to fulfill our social compact with Des Moines and Iowa, as a place where individuals can come together to have relevant conversations on issues of local and national importance. We’re honored to be able to preserve the rich history of two such distinguished public servants.”

In addition to the Harkin and Ray’s papers, the Drake University Archives will make available many other historical items for research. The special collections chronicle the rich history of the University, the state of Iowa, and the nation. Important materials include:
• The Charles Preston Howard Collection: Howard was a Drake Law School alumnus and distinguished lawyer who co-founded the National Bar Association.
• C. Pat Place Jazz Collection: Research files provide an in-depth look at the American music genre.
• The Editorial Cartoons of J.N. “Ding” Darling: Proofs of the Pulitzer Prize-winning cartoonist’s work for The Des Moines Register have been digitized and preserved.
• Historic Des Moines: Photographs capture the city at the turn of the 20th century.
• The Cowles/Kruidenier Collection: Family papers of the three men who presided over the Cowles family publishing empire.

Sen. Harkin announced the gift of his papers to the University Archives at a press conference in May 2013. In connection with this planned gift, the University has established the Tom Harkin Institute for Public Policy and Citizen Engagement, a nonpartisan center designed to serve as a hub for public policy research and programming.

Shortly after Sen. Harkin’s announcement, the Iowa Department of Cultural Affairs announced its new partnership with Drake to provide enhanced access to Gov. Ray’s papers. The partnership allows for significant portions of his papers to be on loan at the University Archives as well as be available for digitization.

PHOTOS: Click here for a look inside the archives.