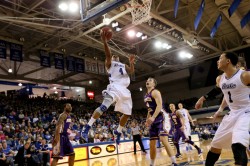 From monumental upsets to half-court buzzer beaters to prestigious honors, this is shaping up to be an exciting year for the Drake men’s basketball team. Here are a few season highlights as of February 22.

The Bulldogs are experiencing a close season, with a record of 12 wins and 15 losses as of February 22. The team has averaged a total of 72.6 points scored per game.