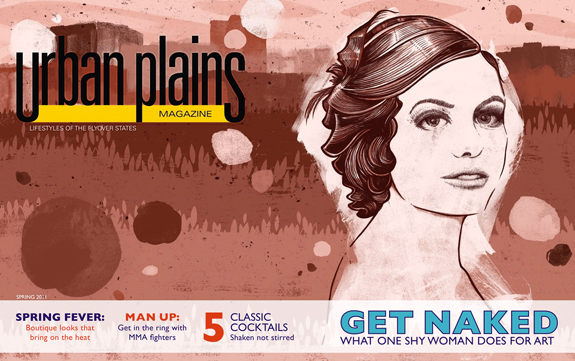 In short, one thing was clear — a traditional print magazine wasn’t going to cut it.

From this vision arose Urban Plains, an all-digital lifestyle magazine for the Midwest set that launched Thursday, Dec. 9.

The issue is available for download and live stream at http://www.urbanplainsmag-digital.com.

The digital format allows readers to flip through on their mobile phones, laptops or home computers. A plethora of short videos, photo slideshows, audio clips and hyperlinked content weave seamlessly into the design. Articles are easily shared to Facebook, Twitter and other social media tools.

A commercial for Urban Plains is available on YouTube.

Until this fall, Drake’s magazine capstone has published 5,000-copy print runs under the names 515 and Think — the latter of which won a prestigious Associated Collegiate Press Pacemaker award this fall.

Without sacrificing the skills required for print, Inman’s staff of 10 students went further. They expanded their organizational structure to include a multimedia editor, blogging editor and social media-oriented director of marketing.

They did away with traditional print design tropes — left and right inside pages separated by a fold — in favor of “double-truck” layouts that span two full pages. In this way, the 60-page Urban Plains publication covers the ground of a traditional 120-page magazine.

The cover is a red screen-print by 2006 Drake alumnus and artist John Vogl of staff writer Allison Maze during her body art photoshoot. It will shift from a double-truck layout to a vertical orientation when viewed by mobile phone users and in the e-store.

Clicking on any of the cover blurbs zaps readers directly to the relevant feature story.

“It is a blessing that we’re doing this online,” said Multimedia Editor Jess Hoffert, a magazine and broadcast news major from Winona, Minn. “It ties in the print side of my magazine major with the multimedia side of my broadcast studies.”

A print magazine, for example, may not have afforded Hoffert the opportunity to film a fashion shoot on the 103-story Skydeck of Willis Tower in Chicago.

Or to include links to 15 hip hop video clips for a feature story slideshow on the 15th anniversary of Rhymesayers Entertainment, the independent hip-hop record label in Minneapolis.

Or to display a video photo slideshow with commentary by Charlie Wittmack, the Des Moines lawyer working on an 11-month, 10,000 mile journey from London to Mount Everest, gathered via Skype while Wittmack was in Uzbekistan.

Once completed, the entirety of the publication is sent to a third-party company called Texterity — makers of digital magazines for AARP, Better Homes and Gardens, Entrepreneur Magazine and other major outlets — for processing.

“This really puts Drake at the forefront of media innovation,” said Inman, who worked as arts and entertainment editor for three different weekly news publications between 1995 and 2001 and spent seven years freelancing for major publications including Rolling Stone and Better Homes and Gardens. “Our students are having to address the absolute same questions people in the industry are now having to deal with, including how to engage their audience in multiple formats and across multiple platforms.”

With a publication aimed at thousands of people in seven major Midwestern cities — an “exploding demographic” that may include readers well beyond the intended audience — the Urban Plains staff has to rely on more than coffee shop chatter to market themselves.

Bowen, a Des Moines native, wasn’t a techno-socialite when she came to Drake. She created her personal Twitter feed as a requirement of a magazine writing class, mostly to promote her personal blog — also a course requirement.

Faculty in Drake’s journalism school are increasingly pushing new media and social media tools as a precursor to careers in magazines, newspapers and other bastions of journalism, said Lori Blachford, the Peggy Fisher and Larry Stelter chair of magazine journalism.

“Because of changes in our industry and our technology, all of our first-year students during their first semester of classes must take a weekly lab to familiarize themselves with technology,” Blachford said. “They’re not meant to be experts, but they want to be comfortable holding these tools.”

As they continue in their journalism track, students find themselves submitting audio recordings of their interviews, presenting photos and captions for travel articles, shooting and editing video profiles in lieu of text stories and corresponding with their faculty members on Twitter.

“It’s the magazine experience on steroids,” Blachford said. “It allows students to jump into new forums in a really real way. If we can teach these students to take a risk in order to start something new, I don’t know that we can do any better for them.”