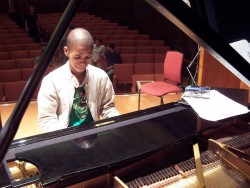 Witness Matlou, a jazz pianist and foreign exchange student from South Africa, originally planned to study abroad at Drake University for only one semester.

After being welcomed by Drake’s music department last fall, joining Jazz Ensemble One and performing recitals at the University and within the Des Moines community, Matlou renewed his student visa and his visit extended to a year. Now, his stellar musicianship and compositions have earned him a full-ride scholarship to attend Berklee College of Music in Boston this fall.

As a farewell to Drake, Matlou will perform a few of his compositions on Saturday, Aug. 28.

The event, which will also feature performances by Drake students and alumni, is free and open to the public. It will begin at 5 p.m. in the Performing Arts Hall of Drake’s Harmon Fine Arts Center, 25th Street and Carpenter Avenue.

A longtime dream and an incredible opportunity

Berklee, which is recognized as the world’s premier college of contemporary music, accepted Matlou as part of its Africa Scholars Program. Matlou received the African Scholarship, which covers up to four years of study and provides recipients with a laptop.

“I have dreamt about Berklee since I was still in high school in South Africa, when one of my mentors and friends, Bra Monk Jerry Molelekwa, told me about Berklee and that his late son, the great South African jazz pianist Moses Molelekwa, wanted to go there,” Matlou said.

“It has always been the school for me. That dream never happened for Moses, but it happens today for me, his father’s student and close friend.”

Matlou, who will study jazz composition, film scoring and music technology at Berklee, said he was grateful to have been selected for the scholarship.

“Berklee has great teachers and it is such an honor to know that I have been chosen to follow in the footsteps of a long list of distinguished Berklee alumni, including great musicians, great artists and legends in the music industry and the entertainment world like Keith Jarret, Quincy Jones and Branford Marsalis. These are my icons.”

Matlou describes jazz as a key element of personal expression.

“I feel I express my thoughts better when playing the piano than if I was to stand up and communicate through word of mouth,” he said.

Education, travel and jazz at Drake

Prior to attending Drake, Matlou studied music at the University of KwaZulu-Natal in South Africa. After he decided to study abroad in the United States, where jazz music originates, he chose Drake after watching YouTube clips of the school’s jazz band.

As a member of Drake’s Jazz Ensemble One, Matlou has had the opportunity to travel to Chicago and Europe to perform. Locally, he has served as a featured soloist with the Tony Valdez Salsa Band, the Mikiel Williams’ Universal Electric Band, Sam Salomon, the Des Moines Community Big Band and the Gateway Dance Theater.

“My favorite memory of my time at Drake is last spring’s graduation ceremony, when the University honored jazz legend Dick Oatts with an honorary degree,” Matlou said. “President Maxwell’s speech that day was so inspiring to me as a young musician. He talked about the important role music plays in our lives, and how it keeps him going.”

“I will miss playing the piano in Jazz Ensemble One, and I will miss the serious commitment enforced by Professor Andy Classen, who demanded perfection at all times,” he said.

“I will miss my friends on campus, my professors, basketball games, my friends in the Des Moines community and life and music in Des Moines. I will for sure come back to visit. Des Moines became my home, far away from home.”