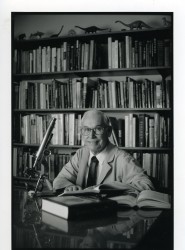 Rodney Rogers, a 51-year professor emeritus of biology at Drake University, died late Thursday, Aug. 12, of complications due to Alzheimer’s disease. He was 83.

Rogers was a beloved teacher, long-time chairman of the biology department and an instrumental force behind the construction of Olin Hall. His lifelong connection to Drake began in 1943, when he paid $127.50 for fall undergraduate tuition as a first-year student, and continued through his retirement from the biology department in 2007.

“I don’t think anyone has more Drake blood running through their veins than he did,” said Rogers’ son, William. “Some people maybe had as much, but not more.”

Rogers joined the Drake faculty in 1955 and chaired the biology department from 1966 to 1992. Rogers and former biology professor Leland Johnson obtained a $3.2 million grant in 1974 from the Olin Foundation that funded the construction of Olin Hall — the university’s biological science building.

His late wife, Frances Rogers, taught comparative anatomy at Drake prior to her death in 1992. Colleagues say the couple lived, worked and dreamed Drake.

“Rodney was really, truly a Drake person,” said Richard Wacha, who served as professor of biology from 1971 to 2009. “That was actually his life. He loved his work dearly.

“I think he was kind of married to the University and the biology department — it was that strength of commitment that was significant. And I think he had a very strong influence on the students and the program because of that commitment.”

Read more about Rogers in a Des Moines Register story written by Daniel Finney, a Drake graduate and one of Rogers’ students.

Students loved Rogers’ course lectures, into which he often wove current topics and events. Sometimes he introduced students’ names into exam questions — a detail that made classmates chuckle.

“He was iconic and memorable for his teaching style and attention-grabbing demonstrations of biology concepts,” said Rachel Boon, director of institutional research and academic compliance. “Any student who had his courses will have a smile and a good Professor Rogers memory.” 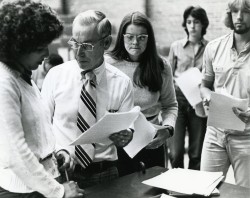 Rogers was an adviser to dozens of students every semester, helping them
with issues in and out of the classroom. He most enjoyed working with
first-year students.

“They’re exposed to ideas that they have never been exposed to before,”
Rogers told Drake Blue Magazine in fall, 2004. “I want them to remember
the things we talk about. They may not recall all the facts, but they
remember ideas.”

Students were drawn to Rogers throughout his career. In 1999, pharmacy
students selected Rogers as the Teacher of the Year outside the College
of Pharmacy and Health Sciences.

He also won a number of other teaching awards, including the university’s Outstanding Undergraduate Teaching Award in 1993.

“The students speak of his vigor and enthusiasm,” then-Provost R.
Barbara Gitenstein said at the 1993 awards ceremony. “They also describe
him as demanding and challenging, but able to make difficult material
seem easy.”

More than a teacher, Rogers was a valued member of his community. He
noted in 1996 that young people “seem to have more concern for one
another nowadays” and was often called upon to identify unknown insects
that people found in their homes.

Rogers is survived by two sons, William and Robert Rogers, and two grandchildren, Katie and Laura.

Funeral services are set for 12:30 p.m. Monday, Aug. 16, at Cottage
Grove Avenue Presbyterian Church, 1050 24th St., Des Moines. Visitation
is scheduled from 4 to 6 p.m. Sunday, Aug. 15, at Westover Funeral Home,
6337 Hickman Road. The service and visitation both are open to the
public.