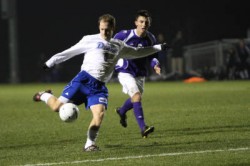 The Bulldogs’ 2009-10 record of 16-7-2 earned the team a No. 14 ranking when the poll was released in early August, and the team is the lone Missouri Valley Conference representative in the Top 25.

“I’m genuinely excited to be recognized in the coaches’ poll,” said Drake Head Soccer Coach Sean Holmes, who has led the program for 13 years. “It is a nice reward after last season’s tremendous performance, and now it’s time for our young players to step up.”

After advancing to the quarterfinals of the NCAA Tournament a year ago, the Bulldogs finished with a No. 8 ranking in the final NSCAA poll, the best finish in program history.

The team’s season opener will be on Sept. 3 against the University of Michigan, a 2009 NCAA Tournament participant.

On Wednesday, Aug. 25, Drake will host an exhibition contest against Loras College at 7 p.m. at the Cownie Soccer Complex, 2600 East Hartford Ave. in Des Moines.