Capture your love for Drake at the Iowa State Fair 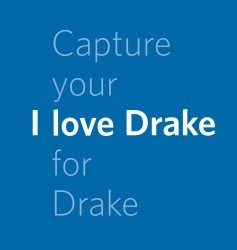 Drake Day at the Iowa State Fair will showcase many ways for fair-goers to “Capture Your Love for Drake” from 9 a.m. to 8 pm. on Saturday, Aug. 14.

Fair visitors can participate in their very own photo shoots with Drake props at the Drake University tent on Rock Island Avenue just east of the Bill Riley Stage.

The Drake tent will feature three different photo stations in which people can interact with Drake props and have their photos taken by photographers.  Photos will be uploaded on the University’s Facebook and Twitter pages.

Fair-goers can also pick up a Drake pennant to incorporate in their own snapshots around the fair and then enter their pictures in Drake’s photo contest. The contest, which will include a panel of alumni judges, features the following categories:

Fans can also meet Bulldog athletes to get their autographs and take photos with Drake’s mascot, Spike.

In addition to Drake Day on Aug. 14, the University will have a display in the William C. Knapp Varied Industries Building throughout the fair, which runs from Aug. 12-22.

“¨Alumni will gather at 7 p.m. at Jalapeno Pete’s at the Iowa State Fairgrounds on Aug. 14 for an informal gathering. Bulldogs are encouraged to wear blue attire and Proud Bulldog or Alumni stickers.