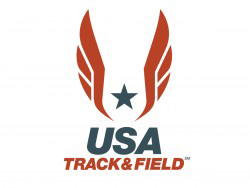 2008 Olympian and Olympic Trials record holder Kara Patterson set an American record in the women’s javelin Friday evening at the 2010 USA Outdoor Track & Field Championships at Drake Stadium on the campus of Drake University. The championships will run through Sunday.

The USA Outdoor Championships are the third stop of the 2010 USATF Outdoor Visa Championship Series, which concludes July 3 with the Nike Prefontaine Classic from historic Hayward Field on the campus of the University of Oregon in Eugene.

Tickets for the 2010 USA Outdoor Championships, which run through Sunday, June 27, may be purchased by dialing 515-271-3647 or by visiting www.godrakebulldogs.com.

Earlier in the competition, Patterson twice hurled the spear to the third-farthest distance in U.S. history, beginning with her third-round throw of 62.61m/205-5, followed by her toss in the fifth-round of 62.80m/206-0. Patterson’s impressive performance makes her the 13th best performer all-time.

Two-time NCAA Outdoor champion and 2009 World Outdoor Championships finalist Rachel Yurkovich was the runner-up to Patterson with a best of 56.31m/184-9, with 2009 USA Champs fourth-place finisher Alicia deShasier taking third with a toss of 55.53m/182-2.

Felix and the rest of the field were hindered by a 2.5 meters-per-second headwind, with Felix emerging as the convincing winner in 11.27 seconds. Her previous best 100m finish at Nationals was fourth in 2007. 2008 Olympic Trials eighth-place finisher LaShaunte’a Moore was the runner-up in 11.34, with 2005 World Outdoor long jump champion Tianna Madison finishing third in 11.43.

Following the gun the field was even until the 70m mark when Dix, who endured an injury-plagued season in 2009, found his stride. Dix continued to gradually lengthen his lead until crossing the finish line well ahead of runner-up Trell Kimmons, who finished in 10.27. Ivory Williams was third in 10.29, with Wallace Spearmon fourth in 10.30. One of the favorites leading up to the final, Travis Padgett, who finished fourth in this event the last two years, was disqualified due to a false start.

Two-time NCAA champion Lauren Fleshman won the second U.S. 5,000m title of her career when she crossed the finish line first in 15:27.70.

Lagat was in second place when he turned on the afterburners and grabbed the lead with 70 meters remaining in the race. 10,000m specialist Tim Nelson gave chase down the main straightaway but was unable to catch Lagat, who crossed the finish line first in 13:54.08. Nelson finished second after a gallant effort in 13:54.80, with seven-time NCAA All-American Andrew Bumbalough of Georgetown, who placed third at the 2010 NCAA Outdoor Championships, finishing third in 13:55.16.

Patience pays off for Bell

Two-time Olympian Kenta Bell has been trying for seven years to win his second career U.S. men’s outdoor triple jump crown and his wait is finally over.

It took 12 years for two-time Olympian Casey Malone to win his first U.S. title in the men’s discus, and now winning this event has become routine.

Malone won his second consecutive national championship with his third-round throw of 62.57m/205-3. The fifth-place finisher at the 2009 World Outdoor Championships in Berlin, Malone finished just ahead of Texas Tech strength coach and current U.S. leader (#2 in the world) Jason Young, who had a best throw of 61.15m/200-7. Young’s second-place performance at Nationals is the best of his career.

Jake Freeman won his first career national hammer throw championship after 11 years of trying with his second attempt toss in the final of 76.51m/251-0. Freeman, who finished as the runner-up in this event in 2005 and 2009, finished ahead of runner-up and 2007 World Outdoor Championships team member Kibwe Johnson, who posted a best of 76.31m/250-4.

Two-time NAIA champion Mark Hollis captured his first national Gill Men’s Pole Vault title with his winning clearance of 5.60m/18-4.50, which is the identical height he conquered in winning the 2010 Millrose Games in New York City.

Five-time national champion and 2003 world champion Tom Pappas leads the men’s decathlon after the first day of competition. Pappas’ second-best shot put throw of his career of 16.87m/55-4.25 helped propel him to the lead with 4,234 points, with Trinity Otto of Texas A&M in second place with 4,152 points.

In Nike Women’s 800m semi-final action, 2007 USA Outdoor champion Alysia Johnson set the Drake Stadium record of 1:59.43, which improved greatly upon the previous standard of 2:01.68 by Suzy Favor Hamilton in 1998.

The following athletes posted the top performances in their respective events in qualifying competition.

The 2010 USA Outdoor Championships will be televised on the following dates (All times Central):

USA Track & Field, in conjunction with RunnerSpace, is providing real-time coverage of all events not broadcast on television. Highlighted competitions in the webcast include Thursday’s men’s and women’s 10,000m as well as extensive field event coverage. Webcasts will also include the voices of elite athletes as guest commentators. The webcasts will be found on the USATF 2010 Championships page in addition to an already posted video clip from USATF CEO Doug Logan on the partnership at www.usatf.org