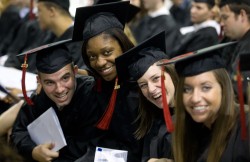 More than 1,400 undergraduate and graduate students celebrated their commencement rites of passage at Drake University’s graduation ceremonies in May. Videos of the ceremonies are available on the Drake Telemedia Center’s Web site.

A total of 730 seniors were recognized at the Undergraduate Commencement Ceremony, which featured keynote addresses by:

Among the class of 2010, some students are continuing the Drake family tradition, while others are paving the way for future Bulldogs. As the caps and gowns were donned, one thing was clear for those graduates: the Drake experience is a family affair. Here are some of their stories.

Father to graduate with his son after 26 years at Drake

Graduation
is a special time for parents, as they celebrate the hard work and
accomplishments of their children. This year, Drake commencement was
even more special for one father, who followed his son across the stage
after 26 years of dedicated learning and service to the University.

Joseph Scavo, 47, and Jeremy Scavo, 22, of Grimes, Iowa, each
earned a bachelor’s degree in radio/television production and graduated
Sunday. Their ties to Drake run deep, as Joseph has worked as a systems
administrator in the College of Pharmacy and Health Sciences for nearly
27 years.

“The thing about Drake is it is such an important part of my life
and for my children. Even seemingly personal events have some tie to a
lifetime of being at the University,” said Joseph, who took classes
while, not only working at Drake, but also single-parenting his four
children.

“Part of where I got my interest in photography is from playing in
Drake’s TV truck as a little kid,” said Jeremy, who works as a
freelancer and photographer for KCCI Channel 8. “Also, my dad would
bring home his books and I would play with his cameras, so in a way I
was learning from professors before I ever took their classes.”

During their mutual four years at Drake, the Scavos said they
really did not see as much of one another as one might think, but they
did take a few classes together. When asked about that dynamic, Jeremy
jokingly replied: “It was fun, because it always kind of weirds the
professors out, and also because Dad takes more notes, but I usually
got the better grade.”

Now the future looks bright for the two graduates, who plan to go
in different professional directions and will avoid competing for jobs.
Jeremy says he will continue his current photojournalism while pursuing
the possibility of graduate school, whereas Joseph intends to stay
close to home.

“I really don’t know what I’ll be when I grow up,” Joseph joked, “I’ll probably just continue to hang out at Drake.”

Vietnamese refugee becomes first in family to graduate from college

Drake’s
commencement was not only a time to celebrate individual
accomplishment, but also new family legacy for many students who became
the firsts in their families to graduate from college. For senior
Xuan-An Nguyen, originally of South Vietnam, this is just the case as
she overcame a family history riddled with war and poverty to cross the
stage with a Drake diploma.

From a young age, Nguyen was encouraged to pursue higher education
by her father, who graduated from high school in Vietnam but was not
able to attend college. Instead, he was required to join South
Vietnam’s war effort and was then taken prisoner for seven years.

Following his release, the United States granted the Nguyen family
refugee rights. They settled in Sioux City, Iowa, when Nguyen was only
5 years old, in pursuit of a better life and education for the young
children.

“Where I lived in the Vietnam countryside, the landscape is pretty
and life is calm, but there is a wide separation of rich and poor,”
said Nguyen, who has visited Vietnam four times since immigrating to
the United States. “The currency is so spread out that people aren’t
making enough to support their families.”

Both Nguyen and her brother Nhut made education a priority under
the advisement of their late father, who died in 2007 during Nguyen’s
first year at Drake. With the sustained support of her family, Nguyen
graduated with a bachelor’s degree in biochemistry, cell and molecular
biology just as Nhut prepares to enter Drake’s pre-pharmacy program
next fall.

In addition, Nguyen will continue her education even further by
attending Des Moines University for medical school this fall, with
plans to pursue a career in either geriatric or pediatric medicine.

“My dad was the source of my motivation to get a better education,
so it was hard to keep going when he died,” Nguyen said, “but I know
he’d be proud of me if he were here today.”

One family that is without a doubt true blue saw its ninth Drake
University graduate cross the stage today among 730 undergraduates,
wearing a gown that’s been around for more than a century.

Senior Abby Dierks, of Granger, Iowa, graduated at Drake’s
Undergraduate Commencement Ceremony this morning, sporting a family
graduation gown that made its debut when her great grandmother, Leonta
Starzinger Morrison graduated from Drake in 1906.

To date, the garment has been worn by a member of the Morrison clan
in every decade since the 1930s, last appearing on Dierks’ cousin and
Drake alumnus Phillip Longman in 2006.

“Graduation was extra special because I was accompanied by years of
history,” said Dierks, who will received a bachelor’s degree in
psychology. “It is a reminder of all of the hard work my family has
accomplished. It’s very inspiring to think about all of their lives and
how they connect with my own.”

Other Drake alumni who have worn the gown include Dierks’
grandfather and longtime Bulldog athletics historian Paul Morrison
(1939) and her mother, Holly Morrison Dierks (1976).

“I am proud that Abby is carrying on this wonderful family
tradition,” Morrison said. “Both my mother and father graduated in 1906
and we have been a true blue Drake family ever since.”

In total, the gown has appeared at 15 college graduations at Drake,
the University of Iowa, Coe College, Bradley University, the University
of Michigan, Culver-Stockton College and the former Phillips
University.