Drake Observatory series to discuss end of the world 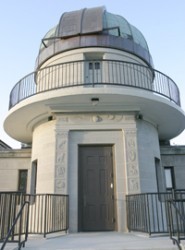 The end of the world and doomsday prophecies will be the
focus of a presentation at the Drake Municipal Observatory on Friday, April 23.

The event, titled “The End of the World Star Party,”
is free and open to the public as part of the spring series of public programs
at the observatory.

It will start at 8 p.m. at the observatory in Waveland Park
on the west side of Des Moines, 4898 Observatory Road, off of Polk Boulevard.
Parking is available adjacent to the observatory.

This program will focus on the various “doomsdays”
that humanity has outlived and those that are predicted to occur. Doomsday
stories of cataclysmic destruction will range from Y2K fears to the Mayan
prediction of the end of the world in 2012.

The lecture will be the shortest of the series to allow time
for star observation. Following this lecture will be a Star Party in which
telescopes will be set up to view particular objects of interest for an
extended viewing opportunity.

The spring series features weekly non-technical,
illustrated presentations by Charles Nelson or Herbert Schwartz of Drake’s
Department of Physics and Astronomy. Each presentation is followed by the
opportunity to view several stellar objects through the large refracting
telescope and several smaller reflecting telescopes.

The programs are held regardless
of the weather, although the selection for observation is subject to change due
to sky conditions or other special circumstances. Individuals, families, and
small groups are welcomed to attend. A parent or responsible adult must
accompany children.

The schedule for the remainder of the spring series appears below:

For more information, contact Drake’s
Department of Physics and Astronomy at 515-271-3141.