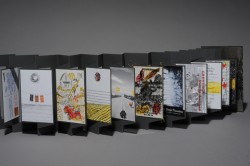 Drake University offers a series of lectures, workshops and demonstrations this spring to highlight the collaborative process among writers, printmakers and bookbinders in the production of artistic handmade books.

Drake’s Spring 2010 Book Arts: Dialogues and Languages also will delve into the cultural frameworks that inform the innovations of the book, as well as the book as an object of humanistic inquiry.

The series begins Tuesday, March 2, and continues through April 29. The list of events, which are free and open to the public, appears below:

The series is sponsored by the Drake University Humanities Center, Cowles Library
and World Languages and Cultures Program in collaboration with Prairie
Book Collaborative of Des Moines.