When Drake’s Billie and Robert D. Ray Lifelong Learning Society decided to commission a bulldog for the Bulldog Parade, the group turned to Des Moines art teacher Sally McKenzie, FA’77, GR’84, and her son, T.J., AS’05.

The Bulldog Parade, which originated at the 2007 Drake Relays, has graced the campus with fiberglass bulldogs painted and decorated with various themes. Additional groups continue to join the parade by sponsoring and customizing bulldog figures.

McKenzie, who teaches art at Hanawalt Elementary and Cowles Montessori School in Des Moines, was a natural choice for creating a unique look for the RaySociety’s bulldog. In addition to being a talented artist, she has myriad family ties to Drake.

Her late father, Frank DeFazio, JO’50, GR’78, GR’87, began lecturing in the School of Journalism and Mass Communication in 1983. He joined the Drake staff in 1968 as director of publications and later served in several other positions, including director of university relations and assistant to the president. He retired in 1992 and died in 2001.

McKenzie’s husband and two sons also attended Drake. Her spouse, John,
AS’76, assisted with the heavy lifting involved in creating the bulldog
for the RaySociety.

Their son, T.J., who majored in sculpture, helped develop and
execute the design. Their other son, Brian, plans to complete his MPA
at Drake by the end of the summer session.

Sally and T.J. consulted with RaySociety leaders on the design for
the bulldog, deciding on a brown and white body adorned with a Drake
letter sweater, Drake pennant and book bag. Peeking out of the book bag
are numerous items ranging from tickets to the 100th Relays to an iPod,
all representing the RaySociety’s philosophy of lifelong learning.

The RaySociety’s bulldog was unveiled as the group’s “newest
member” at the Year-End Celebration and Annual Meeting on May 27.
Members of the audience responded with oohs and ahhs and thunderous
applause.

“It has been my honor and privilege to create the RaySociety
bulldog because Drake University has meant so much to our family over
the years,” Sally said.

“My son, T.J., and I worked together, and we want to thank everyone
who contributed ideas to the project. We tried to incorporate all of
the suggestions in some way, and added touches of our own. The process
was a family affair.”

The RaySociety bulldog will have a permanent home outside the west
entrance to Sheslow Auditorium or inside the auditorium. Either
location will make the bulldog a highly visible symbol of senior
citizens extending their knowledge through the RaySociety’s classes and
activities.

New classroom to be dedicated to RaySociety classes

Also at the annual meeting, Associate Provost Sue Wright announced
that by the start of fall classes, the RaySociety will have a dedicated
classroom in the Dial Center, 2407 Carpenter Ave.

Two rooms in the Dial Center are being remodeled and renovated into
a single classroom that will hold approximately 30 students. The
classroom will have new furnishings and the latest audiovisual
technology. Parking for RaySociety members will be available in the lot
just north of the Dial Center.

The new facility will be named the Don and Dori Byers RaySociety
Classroom in honor of the couple who spearheaded the founding of the
RaySociety more than six years ago. Don Byers, LW’51, serves as chair
of the RaySociety, which ended the 2008-09 academic year with more than
450 members.

The announcement of the naming of the classroom “came as a complete
surprise to us,” Don said. “They did the work [on the classroom], but
we got the credit.”

The annual meeting also included recognition of RaySociety
instructors and Drake staff members. In addition, new officers were
elected for 2009-10.

“It’s been a great year for the RaySociety,” Don concluded. “We’re
looking forward to another great year in 2010 under the leadership of
Jim Wise and Pat Moran — both seasoned professionals.”

The new officers and board members are:

In addition, Ed Peterson, GR’64, was appointed by the president to a two-year term as chair of the program committee.

For more information about the RaySociety, visit the Web site. 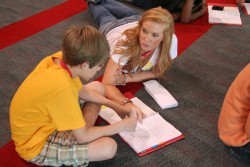 For the second consecutive summer, SuperCamp’s summer enrichment programs for kids and teens will be held at Drake University.