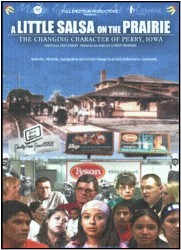 MEDIA CONTACT: Tory Olson, 515-271-1834, tory.olson@drake.edu
Drake University’s Engaged Citizen Experience series will continue on Thursday, March 5, with a screening of “A Little Salsa on the Prairie: The Changing Character of Perry, Iowa,” a film by Drake professor Jody Swilky and independent filmmaker Kent Newman. A panel discussion will follow the screening.
The screening will begin at 7 p.m. in Bulldog Theater in Olmsted Center, 2875 University Ave. and the panel, which will follow the screening, will feature local Perry residents who emigrated to the rural community from Mexico, as well as other countries and U.S. states.
The panelists are:
The film explores changes in Perry that began in the 1990s when the largely white community experienced an influx of Latino workers and their families. Many of these workers traveled to Perry from Texas, California, Mexico and Central America to work in the local meat packing plant. In 10 years, Perry’s Latino population increased from 47 to 1,873, with Latinos accounting for 24.5 percent of the population by 2000.
Swilky and Newman, owner of Full Spectrum Productions, present a historical look at Perry through the film with a focus on immigration, ethnicity and industry, specifically the presence of the meat packing plant as the major employer during the 1960s and the rise and fall of the railroad. The film also addresses the impact of Latino immigration on the economy, society and physical environment in Perry.
To arrange a special screening of the documentary, contact Newman or Swilky at jody.swilky@drake.edu.
Drake’s Engaged Citizen Experience program aims to inform students on global issues and help them understand the ways in which citizens can confront these challenges through democracy. This year’s theme is: “Poverty, Development and Social Responsibility: Whose World is it Anyway?”
All program events are free and open to the public. The remainder of the spring series is listed below:
For more information on the Engaged Citizen Experience program and its events, contact John Burney at 515-271-3804 or john.burney@drake.edu.
Prev Post

Performances of 'The Vagina Monologues' to benefit victims of violence