By Emilee Richardson
Construction began at Drake University this month in an effort to unify the campus in a green landscape while reducing the presence of motor vehicles. As part of the University’s Campus Master Plan, the main focus of the project is to emphasize an environmentally sustainable area.
“You will see a reforested, re-graded pedestrian plaza designed for foot traffic and small service carts,” said Mark Chambers, facilities operations manager. “There will be numerous plantings along the way, new sidewalks, benches, trash receptacles and bike racks.”
The portion of 28th Street between University and Forest Avenues has been removed and will be replaced with a wide, eco-friendly pedestrian walkway.
The path will be lined with nearly 80 red oak trees and more than 350 shrubs. In keeping with the goal of sustainability, recycled plastics and metals will be used in the benches and trash containers. The walkway will become a natural drainageway that will help contain and absorb rainwater, and it also will be accessible to emergency vehicles.
In addition, Carpenter Avenue between 27th and 28th Streets, which is also known as the “painted street,” will be removed and replaced with an elevated concrete canvas for annual Relays street painting.
The project is funded by a $1.5 million federal grant from the Department of Transportation in an effort to increase pedestrian traffic in areas such as Drake’s campus. The project is scheduled to be completed this November.

Although the project won’t be finished in time for the start of classes in August, Chambers assures the Drake community that the facilities staff will assist with pedestrian traffic in every way possible during construction.
“Drake has waited a long time for an opportunity like this to come around,” he said, “and I think it will be worth the little bit of inconvenience to see it come to fruition.”
The project was designed by Confluence (formerly Brian Clark & Associates), a firm of landscape architects and planners in Des Moines. Elder Corporation is the general contractor.
The Drake University Campus Master Plan is a 20-year plan that was approved by the Board of Trustees in 2005. It includes projects to be completed within the first five years as well as long-term goals. This summer’s construction to enhance the campus’ image is part of the five-year plan. For detailed information and renderings of the Campus Master Plan, visit the Web site. Updates are also available online. 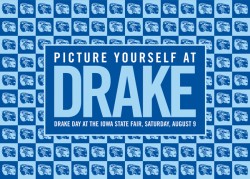 Drake Day at the Iowa State Fair will showcase many ways to “Picture Yourself at Drake” on Saturday, Aug. 9. The free festivities will take place from 9 a.m. to 8 p.m. at the Drake University tent on Rock Island Avenue just east of the Bill Riley Stage.

The Drake tent will feature life-size photo cutouts representing different aspects of Drake life as well as a 25-foot-tall Spike the Bulldog. Visitors will be able to put their faces into several “virtual” Drake scenes and snap souvenir photos. Drake-themed disposable cameras will be handed out, but quantities are limited.

University President David Maxwell will greet visitors at the Drake tent from 10 to 11 a.m. Then he will move to the Iowa Pork tent, where he will serve as an honorary chef for two hours. The Iowa Pork tent is located two doors east of Ye Old Mill on Grand Avenue.

Drake Relays Director Brian Brown will be at the Drake tent from 9 a.m. to noon, promoting the celebration of the 100th birthday of the Relays (April 23-25, 2009). Plus, Drake student-athletes and coaches will visit the tent at various times to sign free, limited-edition sports posters. The following teams are scheduled:

Also at the tent, Drake pharmacy students will conduct heartburn screenings for fairgoers. In true fair fashion, the screenings will include free samples of Prilosec on a stick for those suffering from heartburn after indulging in the fair’s vast array of deep-fried foods.

In addition to Drake Day on Aug. 9, the University will have a display in the William C. Knapp Varied Industries Building throughout the fair, which runs from Aug. 7-17.

For more information about Drake Day at the Iowa State Fair, contact Michelle Thilges or Emilee Richardson at 515-271-3163 or mcstaff@drake.edu. 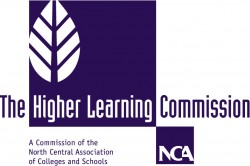