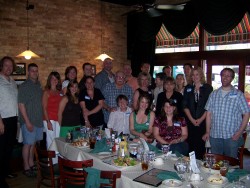 In June, Linda Robbins Coleman, FA’76, and William S.E. “Doc” Coleman, professor emeritus of theatre arts, gave nearly 50 Drake theatre arts alumni a great reason to get together in Chicago. Every generation of Drake theatre arts alumni from Professor Coleman’s tenure at Drake — 1966 through 2000 — was represented. “It was a real trip down memory lane,” he said.
From left to right, front row: Linda Robbins Coleman, Molly Kirk, Julie Burt Nichols; second row: Jessica Remis Moran (black shirt), Mickie Pascal Frellick, Professor Coleman, Julie Norris Westrom, Michael Mitchell, Judy Mencken, Kate Kreissel, Karen Peterson Thelman, Ryan Magnuson; back row: Scott Cooper, Ross Froelich, Jodi Hull, Ann Swisshelm, Cory Fowkes, Seth Kramer, Jeffrey Launius, J. Geneske, Mike Kreissel, Anthony Martinez.
Got photos from your gatherings with fellow Drake alumni? Send them to Barb Dietrich Boose, director of alumni and parent programs, at barbara.boose@drake.edu.
Share your favorite Drake photos and memories
More than 50 Drake alumni and friends enjoyed a pre-game picnic and then cheered the Schaumburg (Ill.) Flyers to victory over the Kansas City T-Bones July 26. In the photo from left are: Sandy Peterson Maxwell, AS’98; Clark Maxwell, AS’94; Erik Bilstad, JO’99; Angie Van Caster Bilstad, JO’98; and Noah Bilstad. Not shown is five-week-old Piper Maxwell.
We want to see photos of your favorite Drake memories and get-togethers, too. Send us your personal snapshots of the Drake moments you treasured most and we’ll publish them in the Drake alumni scrapbook program, sponsored by the Drake National Alumni Association. Your pics will be included in a lively online photo gallery and may be printed in Drake publications like Drake Blue, the University magazine.
What to submit:
How to send your pictures:
Calee Himes
Drake University Office of Marketing & Communication
2507 University Ave.
Des Moines, IA 50311
Questions? Contact Calee Himes at 1-800-44-Drake, x3247 or alumni.scrapbook@drake.edu.
By providing Drake your photographs, you are granting the University permission to use them for various print and online marketing efforts.

Show your Drake spirit everyday with new Iowa license plates sporting the Bulldogs logo (as pictured). The first 500 plates must be ordered through Drake to be produced, so please order now. Orders must be received by Monday, Sept. 1.

2. Include a check for $50 payable to Drake University

3. Mail the order form and check to:

Drake graduate honored by Baseball Hall of Fame
Courtesy of MLB.com
COOPERSTOWN, N.Y. —  For the second straight year a Drake graduate was enshrined into a major sports Hall of Fame, being recognized for his media contributions.
Larry Whiteside, a 1959 graduate, was posthumously awarded the J.G. Taylor Spink Award, presented annually during the Baseball Hall of Fame induction ceremonies Sunday.
The award honors meritorious contributions to baseball writing. Whiteside began a 45-year journalistic career at The Des Moines Register from 1957-59 before stints in Kansas City, Milwaukee and Boston.
Longtime Phoenix Suns announcer Al McCoy, a 1954 graduate of Drake, received the Curt Gowdy Media Award during the Naismith Memorial Basketball Hall of Fame ceremonies Sept. 7, 2007.
Tony Whiteside accepted  the J.G. Taylor Spink Award on Sunday for his father, Larry Whiteside, who died last year.
The younger Whiteside spoke eloquently and admirably in honoring a journalist whose influence was felt beyond his readership.
Larry W. Whiteside was the 59th recipient of the award, and the third African-American, behind Wendell Smith in 1993 and Sam Lacy in 1997.
A respected reporter who spent 31 years of his career with The Boston Globe, Whiteside made it easier for other African-Americans to follow. In 1971, he assembled and circulated among editors a database of qualified black journalists. At the outset, The Black List had nine names; by 1983, it numbered more than 90.
Born in Chicago on Sept. 19, 1937, “Sides” also worked at the Kansas City Kansan and Milwaukee Journal Sentinel. He covered Hall of Famers Hank Aaron, Eddie Mathews and Warren Spahn with the Braves before the franchise moved to Atlanta, following the 1965 season.
When Whiteside moved into the Boston Red Sox beat in 1973, he became the only black reporter regularly covering Major League Baseball for a major daily.
In 1980, having met the 10-years-on-the-beat qualification, he became the first black Hall of Fame voter.
“Indeed, my father’s legacy is a message of hope and courage,” Tony Whiteside said Sunday. “While it is tempting to view my father’s career strictly through the prism of race, he didn’t see things that way. He was a hard-working journalist, and a baseball man above all else.
“And he earned the respect of others as a talented writer, colleague and friend.”
As Red Sox beat writer in 1986, he authored the game story on the team’s heart-wrenching and ignominious collapse in Game 6 of the World Series against the New York Mets.
He wrote of that fateful Saturday night at Shea Stadium: “The Miracle Mets have returned to Shea Stadium. And the demons of 68 years’ worth of failure will haunt the Red Sox for at least another day.”
When Tony Whiteside finished his speech, master of ceremonies George Grande thanked the younger Whiteside.
“Tony, you fill those shoes just fine,” Grande said. “Pop’s up there watching, and he’s proud.”
Alumnus, former trustee Kenneth A. Macke dies