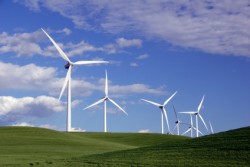 Eight law students and three attorneys have been taking one of the nation’s first courses on wind law at Drake University Law School this spring.

Although wind-generated electricity is increasing rapidly throughout the country, a seminar on wind energy is especially appropriate for Iowa.

The state ranks first in the nation in the percentage of wind-generated electricity on its grid, and Iowa is fourth in total generation capacity, according to the American Wind Energy Association.

Iowa had its first 300 turbines planted in 1999 and now has more than 1,100 turbines with the potential to generate electricity from wind to serve up to 389,000 average Midwest homes. In addition, six major wind-generation manufacturers — Acciona, Siemens, Clipper, Hendricks, Trinity Structural Towers and TPI Composites — have located or plan to come to Iowa.

“Development of wind energy is an increasingly important economic and political issue for Iowa and the nation,” said Hamilton, an advocate for locally and community-owned wind development. “The potential for wind energy and the essential need for legal advice means law students and lawyers can benefit from studying this emerging topic.”

Guest speakers at the class have included John Norris, chairman of the Iowa Utilities Board, and Tom Wind, an electrical engineer and owner of Wind Utility Consulting PC. Students in the class are attending the American Wind Energy Association meeting in Des Moines.

Topics addressed in the course include:

Hamilton is former president of the American Agricultural Law Association and former co-chair of the U.S. Department of Agriculture Small Farms Advisory Committee. He now chairs the advisory board for the Leopold Center for Sustainable Agriculture at Iowa State University and is the board chair of the Iowa Natural Heritage Foundation.

He has been a consultant for many international organizations, such as the United Nations Development Program in China, the Royal Botanical Garden at Kew, the World Bank and the International Potato Research Center in Lima, Peru.

Drake Orientation and NCAA Championships on as scheduled; I-80 detour directions available

Drake to hold workshop for teachers of students with intellectual disabilities