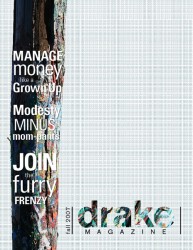 Drake Magazine, a biannual publication produced by students
at Drake University, has been recently awarded top prizes by both the
Associated Collegiate Press and the Society of Professional Journalists.

The Fall 2007 issue of Drake Magazine received five Region 7
Mark of Excellence Awards, which honor the best in student journalism in 39
categories for print, radio, television and online. Entries are first judged on
the regional level; first-place winners move on to the national competition.

Blanchard’s article, “A Shot in the Dark,”
discusses the hidden health dangers of diabetics skipping their insulin shots.
“Girls Gone Mild,” written by Porter, explores “the modesty
movement,” a more conservative fashion trend that started in reaction to
the revealing apparel worn by most teens. Broek’s article, “Pink Washed
Market,” examines the proliferation of pink products being sold in support
of breast cancer research.

“The fact that these students publish this magazine as
an extracurricular activity makes these awards that much more laudable,”
said Angela Renkoski, assistant professor of journalism at Drake and faculty
adviser for the magazine.

The awards ceremony for all of the regional winners will
take place at the Mark of Excellence ceremony on April 5 at the Society of
Professional Journalists’ Spring Conference. The conference will be held in the
Scheman Building on Iowa State University’s campus in Ames, Iowa.

“This is an honor for these students and speaks highly
of their talent and determination to produce quality journalism in this
medium,” Renkoski added.

ACP gives out awards for magazines, newspapers and online
publications, as well as individual student awards for stories, reporters,
photography, design, cartoons and advertising. The winner of the award will be
announced at the National College Media Convention in Kansas City, Mo. in fall
2008.

Read more about SPJ Awards online. For more information on ACP, visit the Web site. Additional information about the magazine program at Drake is available online.