Drake International Film Series to feature ‘The Lives of Others’ 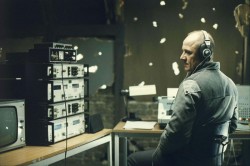 Drake University’s spring International Film Series will begin Sunday, Feb. 17, with a screening of “The Lives of Others,” a German film with English subtitles, at 2 p.m. in room 101 of Meredith Hall, 2805 University Ave.

At once a political thriller and human drama, “The Lives of Others” begins in East Berlin in 1984 — five years before the fall of the Berlin Wall — and ends in reunited Germany in 1991. The film traces the gradual disillusionment of Captain Gerd Wiesler, a highly skilled officer who works for the Stasi, East Germany’s all-powerful secret police.

The series is sponsored by Drake’s Center for Global Citizenship and the Drake University Language Acquisition Program. All of the films, which are free and open to the public, will start at 2 p.m. in room 101 of Meredith Hall.

The schedule of films for the remainder of the spring semester appears below:

March 9 — “Le Grand Voyage” — French with English subtitles. This film tells the story of Reda, a young man just weeks away from his college exams, whose strained relationships with both his father and his culture are put to the test when he drives the older man on his pilgrimage to Mecca. Jan Marston, director of Drake University Language Acquisition Program, will introduce the film and lead a discussion afterwards.

April 6 — “Osama” — Arabic with English subtitles. This film tells the story of a 12-year-old girl, her mother and a local village boy who narrowly survive the brutal end of a peaceful demonstration organized by women who are oppressed by the cruel Taliban regime. After witnessing such inhumane treatment, the mother is reminded of her own hardships as she and her daughter struggle to maintain their existence. Debra DeLaet, Drake professor of politics and international relations, will introduce the film and lead a discussion afterwards.

Drake Choir to perform benefit concert to support May tour