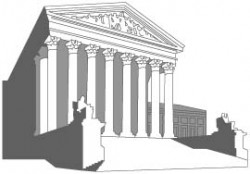 Drake University Law School will host the final rounds of the national tournament of the American Collegiate Moot Court Association on Saturday, Jan. 19.

This is the first time Drake has hosted the tournament, which has brought 128 undergraduate students from 29 colleges and universities across the country to Des Moines to present legal arguments on appeal in a hypothetical case before the United States Supreme Court. The 64 teams competing have been selected through a series of regional contests.

“Drake Law School is honored to host this national competition,” said Law School Dean David Walker. “We appreciate the opportunity to support law-related education and to bring top students from across the nation to see Des Moines and Drake and to interact with the legal community here.”

Drake University is represented by two teams in the national tournament.

The tournament began Friday with each of the 64 teams competing in three rounds. The teams were judged by Drake Law School faculty members, alumni, judges and attorneys as well as second- and third-year law students with moot court experience.

The case involves an appeal to the U.S. Supreme Court of a Court of Appeals decision regarding a father who home-schooled his three children and worked as a part-time gunsmith out of his home. The father was charged with violating the federal Gun Free School Zone Act of 1997. The appeal hinges on whether the law violates the Second Amendment to the United States Constitution and whether Congress exceeded its constitutional powers granted by the Commerce Clause when it enacted the law. The case is based upon one that has been accepted by the United States Supreme Court for review this term.

On Saturday morning, the top 32 teams will compete in round four and the 16 winners will advance to round five. The top eight teams will then compete in the quarterfinals and the winning four teams will move on to the semifinals. Among those judging for the semi-final round are Judges Anuradha Vaitheswaran and Larry Eisenhauer from the Iowa Court of Appeals, Chief Judge Arthur Gamble from the Iowa District Court for the Fifth Judicial District, and Judges Carla Schemmel and D. J. Stovall, also from the Fifth Judicial District.

The championship round will take place from 3:30 to 5 p.m. Saturday in the courtroom of the Neal and Bea Smith Law Center, 2400 University Ave. Judging the final round will be Iowa Supreme Court Justices Mark Cady, Michael Streit and David Wiggins; Senior Judge and former Iowa Chief Justice Louis Lavorato; and Chief Judge of the U.S. District Court for the Southern District of Iowa Robert Pratt.

“We are very pleased with the strong support we’re receiving from the legal community,” Walker said. “We’re especially honored to have such distinguished judges involved in the selection of those competing in the Championship Round and the national champion.”

There will be an awards banquet starting at 6 p.m. Saturday in Parents Hall at Olmsted Center, 2875 University Ave. The awards ceremony is scheduled to start at 7 p.m. In addition to trophies for the top 32 teams, awards will be presented to individual students recognized as top orators and authors of the best appellate briefs.