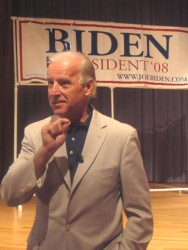 Delaware Sen. Joe Biden, a Democratic presidential candidate, said at Drake University-IowaPolitics.com’s “Cookies and Conversation” event today that he has spent too much time considering how he would lead the United States and not nearly enough time organizing and raising money for his campaign.

“The mistake I made was focusing more on how I would govern than on putting together a political organization and raising money, but I’m well on my way to recovering from that,” Biden said Friday, July 13, at the State Historical Building in Des Moines. He added that he has never had a national fundraising effort and called it “obscene” that candidates need to raise $100 million to become election front-runners.

Biden emphasized the importance of voters, especially in Iowa. ” I wasn’t joking when I said that the way I win is you,” he told the crowd of more than 200 people. “I believe you will allow me to compete. Whoever does well in Iowa — beats expectations in Iowa — does well in Nevada and wins New Hampshire is going to be your nominee.”

Taking questions from moderator Chris Dorsey, bureau chief of IowaPolitics.com, and from the audience, Biden outlined his position on several issues that he said lay the foundation for his campaign. National security, global warming, universal health care and education are issues on which he said he refuses to compromise.

“There are some things worth losing elections over,” Biden said.

Biden expressed “genuine frustration” over President Bush’s policies in Iraq, calling for the removal of troops by 2008. “Unless we get our troops out of that civil war, every possibility of us leaving without trading a dictator for chaos evaporates,” he said.

He also criticized President Bush’s international diplomacy. If he were to be elected president, Biden said that he would work to re-establish trust among foreign leaders in matters of war and peace.

“What has gained our country its power is its ideas and its ideals,” he said, adding that military power is necessary but not sufficient to maintain the United States’ status as a world power.

On the subject of global warming and renewable energy, Biden said it was essential that the United States invest $50 billion in the development of new technologies. He called for a cap on greenhouse-gas emissions, tougher automobile emission standards and for the United States to join an international Kyoto-type energy agreement.

“Global warming is the single greatest threat to humanity,” he said, noting that many portions of his home state will be underwater if ocean levels rise several feet due to global warming.

Biden also called for universal health care, especially for infants and children in need, and said that the first two years of college should be free for all students.