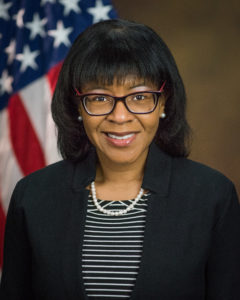 Rosalind Sargent-Burns is a 2003 graduate of Drake Law School. She began her legal career with the Legislative Reference Bureau for the State of Illinois, where she also served as a correspondent for the National Conference of State Legislatures. Today, she is the Acting Pardon Attorney at the U.S. Department of Justice in Washington, DC.

What influenced your decision to go to law school?

I actually wanted to be an attorney for as far back as I can remember. I think, initially, that idea came from some glamorous depiction or another in movies and on television. It wasn’t until I did a semester exchange program at American University in Washington, DC my undergraduate junior year that it all really came into focus. In my Justice Programs course of study, we visited several local jails and prisons. It was then that I really became impacted by the faces and stories of incarcerated individuals and the various populations disproportionately represented. At that point, I knew that in order to effectuate change in the law, I needed to understand it inside and out.

After doing some research, Drake stood out to me because of the Legislative Practice Program. At Drake, not only could I earn my law degree and get a great foundation in the application of the law, but I could also participate in a program of study that would teach me about the drafting, lobbying, and passage of the laws we, as lawyers, apply. In order to change something for the better, you should know how it came to be in the first place.

What advice would you give to undergraduate students considering law school?

Whenever I come across someone mulling over the decision whether or not to attend law school, my advice is consistent–make sure you really want it. Law school is not for the faint of heart, nor is the legal field itself. There are other positions of stature out there that may be easier to come by, so if you’re in it simply for the title or even just the idea, you may want to explore other routes. But, if you want it, you really want it, –regardless of if you know exactly the kind of law you want to practice–go for it, and don’t let anyone or anything stop you. It may not be the easiest road, but if you’re passionate about what you do, it is so rewarding.

Whatever the task, whatever it entails–from the mundane to the monumental–passion and belief in what I do is the force that drives me. Like a lot of areas of life, you can lose your way sometimes in the legal arena – forget the ultimate goal toward which you are working, but if you stay grounded in your beliefs of what is right and what is just (sorry for the cliché), it’s much easier to maintain your footing on the path that is right, and fulfilling and rewarding, for you.

How did getting involved in student activities at Drake shape your legal education?

I participated in both the Black Law Student Association and the Christian Legal Society, and eventually held offices in both organizations. I was also a part of Drake Law Women and was a note editor on the Agricultural Law Journal. In addition, I was a Drake Law Ambassador. I was able to wear so many hats and serve in so many roles. Each experience impacted my legal education in some way, whether by the exposure to the forums and speakers one of the organizations hosted, the lively discussions of various topics between like-minded individuals and those with differing views belonging to each organization, the honed research and writing skills gained from working on the Ag Law Journal and the editing and management skills obtained from serving as a note editor, or just becoming familiar with so many aspects of the faculty and staff in giving tours to prospective students as an Ambassador.

What led you to such a specific area of criminal law?

Like so many others, my path found me. I think the law is known to do that. You start out on one road and end up somewhere totally different, but equally, maybe even exceedingly, fulfilled. While I started out after law school working as a legislative attorney, writing the laws at the Illinois Legislative Reference Bureau, I’m still effectuating change in the interest of justice, but just in a different way. The post-conviction path of criminal law is such a niche area that I couldn’t have planned it.

What has been most challenging about working at the Department of Justice?

Perception. My entire office is comprised of committed civil servants. We work diligently and operate with the highest degree of integrity and professionalism. The decisions and directives may change from one administration to the next, and that’s where public commentary and scrutiny comes in. But as dedicated civil servants bound by the tenets of professionalism, conscientiousness, and confidentiality, we continue on in unbiased and altered diligence. So, public perception about the DOJ and those of us in it may change from news article to news article, but our reality and commitment does not.

Just working for the Department and what that stands for to me personally. DOJ, itself, takes on a kind of mythical quality to it just by virtue of mention, but once you have a tiny bit of insight to its inner-workings, you get to know the heart and the drive of the individuals who comprise it. There’s a pride that can be found in working beside so many different people from different backgrounds and areas, working in a vast multitude of legal areas, and with different fundamental or interpretational beliefs, but all with the same goal in mind of ensuring justice in whatever form that means to them personally.

What are some highlights of your career so far?

I am a proud participant in DOJ’s Pro Bono Program, and have relished working specifically with the Neighborhood Legal Services Program helping individuals who may have been discriminated against based on prior criminal convictions. I am also proud to hold such a position of responsibility in an office that believes wholeheartedly in second chances and that provides a fair and balanced evaluation of each and every application submitted through the Department.

In that vein, another highlight would be my involvement in the prior Clemency Initiative, through which my office worked to secure presidential commutation for over 1,700 nonviolent offenders who, among other criteria, likely would have received lower sentences if convicte of the same offenses today, along with the grant of presidential pardon to close to 200 individuals during that same time period, who faced a multitude of collateral consequences after serving their sentences, including in the realms of housing, employment, student and business loans, and professional licensure.

What advice would you give to current law students?

Take time to breathe and, though it may seem out of the realm of possibility, enjoy it. Make connections with care, and nurture the friendships you make–they will very likely become some of the most important people in your circle through all life throws at you, both professionally and personally.