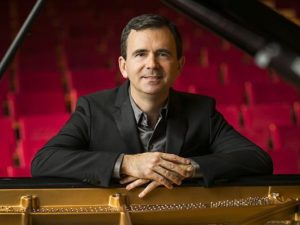 James Giles, coordinator of the piano program and director of music performance graduate studies at the Bienen School of Music of Northwestern University, will present the next concert in Drake University’s Keys to Excellence Piano Series on Monday, April 29, at 7:30 p.m. in Sheslow Auditorium. Admission is free and open to the public. The performance will feature the following works:

Giles will also offer a free masterclass with Drake students on Sunday, April 28, at 7 p.m. in Sheslow Auditorium, which is open to the public.

James Giles regularly performs in important musical centers in America, Europe, and Asia. Recent tours have taken him to the Nancy Music Festival in France, the Accademia Cristofori in Florence, the Gijon Piano Festival in Spain, and the Beijing International Music Festival. Other activities include a recording with the St. Petersburg Chamber Philharmonic in Russia; recitals in Florida, California, North Carolina, and France; and master classes in Hong Kong, Shanghai, Seoul, and at Yale University and the Cincinnati Conservatory. He is director of the Amalfi Coast Music Festival during the summers.

Giles was first prize winner at the New Orleans International Piano Competition, the Joanna Hodges International Piano Competition, the MTNA National Collegiate Competition, and the American Pianists Association Fellowship Awards. In an eclectic repertoire encompassing the solo and chamber music literatures, Giles is equally at home in the standard repertoire as in the music of our time. He has commissioned and premiered works by William Bolcom, C. Curtis-Smith, Stephen Hough, Lowell Liebermann, Ned Rorem, Augusta Read Thomas, Earl Wild, and James Wintle. Most of these new works are featured on Giles’s Albany Records release entitled “American Virtuoso.” His recording of solo works by Schumann and Prokofiev is available on England’s Master Musicians label and a new Schubert CD is due for imminent release. He recorded John Harbison’s Horn Trio with the Chicago Chamber Musicians.

His Paris recital at the Salle Cortot in 2004 was hailed as “a true revelation, due equally to the pianist’s artistry as to his choice of program.” After a recital at the Sibelius Academy, the critic for Helsinki’s main newspaper wrote that “Giles is a technically polished, elegant pianist.” A London critic called his 2003 Wigmore Hall recital “one of the most sheerly inspired piano recitals I can remember hearing for some time” and added that “with a riveting intelligence given to everything he played, it was the kind of recital you never really forget.”

A native of North Carolina, Dr. Giles studied with Byron Janis at the Manhattan School of Music, Jerome Lowenthal at the Juilliard School, Nelita True at the Eastman School of Music, and Robert Shannon at Oberlin College. He received early career assistance from the Clarisse B. Kampel Foundation and was awarded a Fulbright Grant to study in Italy with the legendary pianist Lazar Berman.

Giles and has presented lecture-recitals at the national conventions of the Music Teachers National Association, the College Music Society, and Pi Kappa Lambda. He regularly serves on competition jury panels and has been conference artist for many state music teachers’ associations. He has taught during the summers at the Eastern Music Festival, Bowdoin, Brevard, Art of the Piano, Colburn, Interlochen, ARIA, Pianofest in the Hamptons, and the Schlern Festival in Italy. He has been a guest professor at the Sibelius Academy, the Shanghai Conservatory, and Indiana University (teaching the students of Menahem Pressler). Dr. Giles has taught classes at the Chopin Academy in Warsaw, the Royal Northern College of Music in Manchester, and the Royal College of Music in London.

About Keys to Excellence

Keys to Excellence Piano Series was created to raise awareness of Drake’s fundraising efforts for 70 new Yamaha pianos for the music department. It brings internationally acclaimed artists to perform on the Yamaha CFX concert grand at Drake University. The series is supported by Yamaha, West Music, Civic Music Association, and Drake University. For more information, contact Nicholas Roth at 515-321-5947 or nicholas.roth@drake.edu