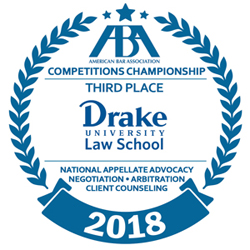 Drake Law School also competed in the ABA Client Counseling Competition and NAAC Moot Court, where the team of Taylor Larson, Abdullah Azkalany, and Gail Beech advanced to the regional semi-finals. Joshua Duden was recognized as the Best Oral Advocate in the regional competition.

According to the ABA Law Student Division’s website, the Competitions Championship was established “to recognize law schools that go above and beyond to help prepare their students for practice.”

The competitions provide opportunities for law students to hone essential legal skills in a simulated practice environment. This year, more than 1,300 students from 156 law schools across the United States participated in one or more of the competitions sponsored by the ABA Law Student Division.