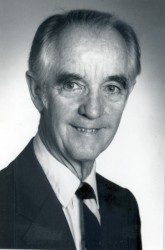 During his 34 years at the College of Pharmacy and Health Sciences at Drake University (1950-1984), Dr. C. Boyd Granberg’s influence on his students and pharmacy practitioners was one of strength and integrity.  As a way to recognize and thank Dr. Granberg for his role in shaping the lives of many Drake pharmacy graduates, a group of alumni is creating a permanent fund to assist CPHS students.

This fund provides valuable scholarship awards that recognize final year pharmacy students who have excelled academically, have financial need, and have demonstrated leadership in advancing the pharmacy profession including significant involvement in professional pharmacy organizations.

Granberg has devoted his career to academic scholarship, service to his profession and the enlightenment of his students. He joined the Drake faculty in 1950 as associate professor of pharmacy and served as Dean of Drake’s College of Pharmacy and Health Sciences from 1977 to 1984. He was also the faculty advisor to the Kappa Psi fraternity.

He was the editor of the American Journal of Pharmaceutical Education from 1961 to 1974. He was editor of Remington’s Practice of Pharmacy, collaborated on Remarkable Pharmacists and was chapter author of the 15th edition of Remington’s Pharmaceutical Sciences. He is past president of the American Association of Colleges of Pharmacy and the Iowa Pharmacists Association, which named him Pharmacist of the Year in 1984. He also received the Drake Medal of Honor in 1998 and the Weaver Medal of Honor in 2000.

Dr. Granberg’s influence spans over three decades of students – today’s alumni continue to share stories of his leadership. For these and so many other reasons, it is important to honor Dean Granberg for his invaluable contributions to his former students, Drake’s College of Pharmacy and Health Sciences, and the profession.

If you are also interested in contributing to the C. Boyd Granberg Student Excellence Fund, please follow one of these steps:

1)  Donate Online with a one time gift or an installment pledge by visiting https://alumni.drake.edu/giveonline. Complete the form, selecting ‘Other’ as the Designation and C. Boyd Granberg Student Excellence Fund in the ‘Other’ box.  Select ‘Add to Cart’ and complete the payment information.

2)  Mail your donation to the Drake College of Pharmacy & Health Sciences, 2507 University Ave., Des Moines, Iowa 50311. Include a note indicating that your gift is for the C. Boyd Granberg Student Excellence Fund.

5 Things to Do While You’re Back for Relays