5 Things to Do While You’re Back for Relays 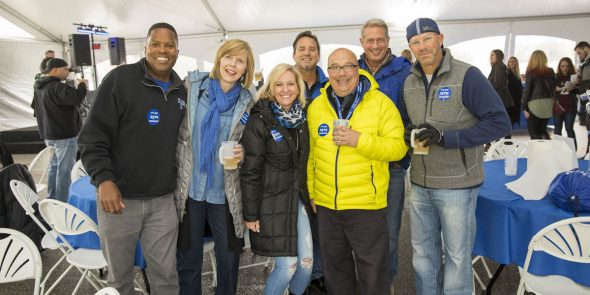 Are you ready for it? The Drake Relays are upon us, and while one of the oldest and largest track and field meets in the nation is a sight to see, the week-long event involves so much more than just activity on the Blue Oval. Here are five ways to make the most of your Relays experience.

Watch as 40 English bulldogs strut their stuff on the pupwalk (no catwalks here!) at The Knapp Center on Sunday and compete in the 39th annual Beautiful Bulldog Contest. The bulldogs will compete for the illustrious cape, crown, and throne, and the honor of being the official bulldog mascot for the 2018 Drake Relays. The contest is free to watch and coo over, and you’ll be able to vote for your favorite pup to take home the Porterhouse People’s Choice Award during the contest.

You don’t have to be an elite athlete to run at the Drake Relays. Hit the pavement during the Road Races or the Grand Blue Mile. This year marks the 50th anniversary of the Drake Road Races, which will be held Sunday morning and include a 5K, 10K, and half-marathon, with all runners finishing on the Blue Oval. Then, on Tuesday, compete, jog, trot, or walk in the Grand Blue Mile in downtown Des Moines. The one-mile street run is for runners of all ages and aspirations and starts in front of the Pappajohn Sculpture Park before making its way down Locust and Grand.

Catch up with old friends, classmates, and perhaps Griff during one of the many receptions and tent parties. Be sure to attend the All-Alumni Tent Party, which is just that—every class, every school, and every college under one tent for a won’t-want-to-miss Friday night party. Other meet-ups include the Greek Reunion, Young Alumni Brunch, LGBTQ+ Reception, and SJMC Alumni Reception.

Go ahead, revisit your old residence hall and check out the latest coat on Painted Street, but also make sure to explore what’s new. Tour Drake’s new academic buildings, The Science Connector Building and Collier-Scripps Hall, on Friday, April 27 from 3:30–5:30. Both buildings opened their doors for the first time this fall and together are the centerpiece of Drake’s $52-million STEM@DRAKE initiative. Collier-Scripps Hall is home to the School of Education, Department of Mathematics and Computer Science, and The Robert D. and Billie Ray Center, while the Science Connector Building links four other buildings—Olin Hall, Morgan E. Cline Hall, Fitch Hall, and Harvey-Ingham Hall—to create a hub for the sciences, including pharmaceutical sciences. The buildings’ state-of-the-art laboratories and classrooms are sure to impress.

Keep your eyes peeled for greatness. Relays attract some of the world’s best athletes. On Saturday, catch a glimpse of Andre De Grasse, a three-time Olympic medalist, set to compete in the men’s invitational 100 meters. In 2016, De Grasse won three medals at the Rio Olympics, including bronze in the 100 meters, behind Usain Bolt. Also a must see is The Vault at Capital Square on Wednesday, and the 3,000-meter steeplechase on Thursday—think seven-and-a-half laps with hurdles and water jumps.

So, whether you are cheering on your favorite athlete or your favorite pup in the Beautiful Bulldog contest, Relays has something for everyone. View a full list of 2018 Drake Relays events.