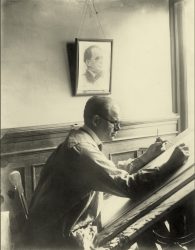 We Knew Him When: An Exhibit on Jay N. Darling features a rare and extensive collection of personal artifacts, sketches, and career memorabilia. The exhibition opens March 26 and runs through May 31 in Drake University’s Cowles Library, 2725 University Ave. Des Moines, Iowa.

The exhibit was curated by nationally recognized Darling expert Sam Koltinsky, a documentary filmmaker who serves as director of the Jay N. Darling Center in Des Moines. The exhibit will be complemented by a series of panel discussions by journalists, historians, conservationists, and scholars.

“This is the most comprehensive exhibition of Darling artifacts and artwork that we’ve ever hosted, offering a glimpse of Darling’s life from childhood, to his college years, and throughout his career,” Koltinsky said. “We are eager to welcome a series of local and national experts to speak to Darling’s legacy as a visionary, political cartoonist, artist, and conservationist.”

Darling received an honorary Doctor of Laws degree from Drake University on June 2, 1926. The exhibition will feature a photograph, recently uncovered by Drake archivists, of Darling in his cap and gown, honorary degree in hand, on the day of the commencement ceremony.

Some additional display materials will be drawn from Drake University’s Archives and Special Collections, which hosts a collection of more than 6,000 editorial cartoons completed by Darling between 1914 and 1948.

Other materials on display include:

Thursday, April 19. “What ‘Ding’ Might Say,” featuring presentations by Dennis Ryerson, former editor of The Des Moines Register and Neil Hamilton, professor of law and director of the Drake University Agricultural Law Center.

Thursday, May 3. Presentation by a representative from the U.S. Fish and Wildlife Service (to be announced).

All events begin at 7 p.m. and are free and open to the public. More information is available at library.drake.edu/ding-darling.

Jay Norwood “Ding” Darling was a leading editorial cartoonist in the 1900s, first for the Sioux City Journal, then for The Des Moines Register and Leader (later known as The Des Moines Register). At the height of popularity, his work was syndicated to 150 newspapers in the U.S., and he received Pulitzer Prizes in 1924 and 1942. An avid environmental conservationist, he was appointed by President Franklin D. Roosevelt in 1934 to a federal position through which he implemented the Duck Stamp Act, designed the first duck stamp, and also founded the Cooperative Research Unit Program. He was also instrumental in the formation of the National Wildlife Federation. Sanibel Island, Florida, is home to the Jay N. “Ding” Darling National Wildlife Refuge.

The Jay N. Darling Center’s exhibition has been traveling for about 4 years—most recently, it was on display at Sioux City Museum in summer 2017—and has been growing steadily throughout its lifespan. In fact, the exhibit originally featured 7 pieces of artwork.