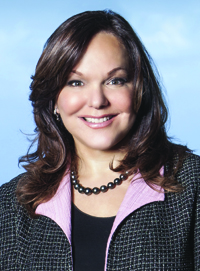 Bass is co-president of Miami-based Greenberg Traurig, where she provides executive leadership for the law firm’s 2,000 attorneys in 38 offices worldwide. She previously served an eight-year term as national chair of Greenberg Traurig’s litigation department and is founder and former chair of the firm’s Women’s Initiative.

Bass has successfully represented high-profile corporate clients in jury and non-jury trials involving hundreds of millions of dollars. She is widely recognized for her efforts to eliminate Florida’s 20-year-old ban on gay adoption, which was found unconstitutional in 2010.

For more than 30 years, Bass has been actively involved in the ABA, the world’s largest voluntary professional organization with over 400,000 members. She previously served as chair of the ABA Section of Litigation, where she spearheaded the creation of a task force on implicit bias in the justice system. She has also served as a member of the ABA’s Board of Governors, House of Delegates, and Commission on Women, and as the state of Florida’s representative on the Nominating Committee.

In recognition of her success, Bass was inducted into the American College of Trial Lawyers. She is consistently ranked in Chambers USA Guide, Legal 500 United States, Super Lawyers, Florida Trend magazine’s “Legal Elite,” and more. In 2016, Bass was named “Lawyer of the Year” in Litigation-Securities by The Best Lawyers in America.

The Supreme Court Celebration recognizes the tradition of academic excellence, leadership, and service at Drake Law School as well as the Law School’s long-standing relationship with the Iowa Supreme Court.

The events conclude with the Supreme Court Celebration Banquet and Awards Ceremony on Saturday, March 24, at Olmsted Center, Parent’s Hall. A reception starts at 6 p.m.; dinner is served at 7 p.m. During the banquet, student and alumni award winners will be recognized, including the 2018 Alumni of the Year and Recent Alumni of the Year.