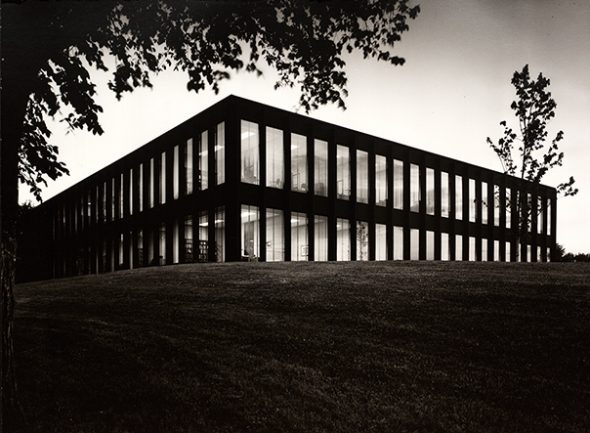 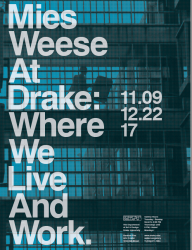 The exhibit, which runs Nov. 9 through Dec. 22, contrasts the architects’ visions for their buildings with the memories and traditions of those who have inhabited them.

“During the 1960s and 1970s, many U.S. colleges and universities redefined their educational missions through long-term planning and building campaigns,” said Maura Lyons, exhibition curator and professor of art history at Drake University. “Drake’s approach was distinct because the university renewed its commitment to modernist architecture, begun two decades earlier with the construction of multiple buildings designed by Eliel and Eero Saarinen. This exhibition provides an unprecedented look at the legacy of Mies and Weese on Drake’s campus.”

Free public events associated with the exhibition include a gallery opening with remarks from the curators on Nov. 9; a panel discussion on current building projects at private colleges and universities in Iowa on Nov. 11; and lectures on the work of Harry and Ben Weese and Mies van der Rohe on Nov. 16 and Dec. 7, respectively.

The exhibition is the result of a collaboration between Lyons and Drake students enrolled in a curating course. Students are involved in all aspects of the exhibition including selection, research, writing, design, installation, and public outreach.

Mies van der Rohe, whose most famous work includes the Seagram Building in New York, the Chicago Federal Center, and the Neue National Gallery in Berlin, designed Meredith Hall (1965), which is home to Drake’s School of Journalism and Mass Communication.

One of the exhibit’s centerpieces is a large-scale model of Drake’s campus, completed by Mies’ office in the 1960s to showcase the architect’s vision for Meredith Hall. The detailed wooden model was recently found in a dark corner of the attic of Sheslow Auditorium—buried in dust, forgotten for decades, but luckily protected by a glass case.

“We actually didn’t know what it was until we got it out of the attic,” Lyons said. “It’s very heavy, and our facilities team had to lift it over a structural beam that had been placed in its path at some point during the decades that it was up there.” 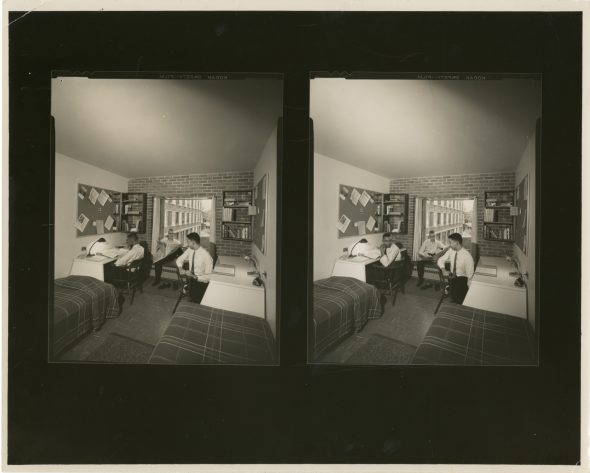 Bulldogs put their stamp on the Mies and Weese legacy

Great architects have a vision for the way their buildings will be used. The people who live, work, and play in them often have other ideas.

For example: Mies van der Rohe may have designed Meredith Hall’s wide hallways to accommodate foot traffic, but it also created an ideal environment for a former Times-Delphic student newspaper editor to pull her friends around in a red wagon.

Harry Weese probably never imagined that students would use Goodwin-Kirk’s utilitarian rows of residence hall doors for a unique “musical prank”: slamming each door, one after another in succession, to create a wave of sound that raised unsuspecting undergrads from their slumber.

The Mies | Weese exhibition uses photographs, video footage, and letters from Drake alumni to contrast the architects’ visions with its inhabitants’ memories and traditions.

“Great architecture is defined not only by those elements envisioned by the architects, but also by the ways in which people alter those spaces to make them their own,” said curator Maura Lyons. “A buildings meaning is shaped by sounds and smells, by behavior that shapes the physical and emotional features of the space—in short, by the humans who inhabit them.”

The Anderson Gallery has scheduled several programs that are free and open to the public in conjunction with the exhibition:

The exhibition is supported by a major grant from Humanities Iowa, a state-based affiliate of the National Endowment for the Humanities, and by an art project grant from the Iowa Arts Council, a division of the Iowa Department of Cultural Affairs, and the National Endowment for the Arts. Additional funding has been provided by Friends of Drake Arts and from the Office of the Provost and College of Arts and Sciences at Drake University.

About the Anderson Gallery

The Anderson Gallery, a non-profit exhibition space on the campus of Drake University in Des Moines, was founded in 1996 to exhibit and support innovation in art and design. Part laboratory, part showcase, the Gallery’s main goal is to promote the growth and understanding of art through exhibitions, programs, and publications.

The Anderson Gallery is open Tuesdays, Wednesdays, and Friday through Sunday, 12 p.m. to 4 p.m.; and extended hours on Thursdays from 12 p.m. to 8 p.m. The gallery is closed on Mondays and during University holidays.

The Anderson Gallery is located within the Harmon Fine Arts Center at 1310 25th Street, at the corner of Carpenter and 25th. For more information, contact the gallery at 515-271-1994 or visit https://theandersongallery.wordpress.com.

The ITS Phishing Quiz is Coming Soon!