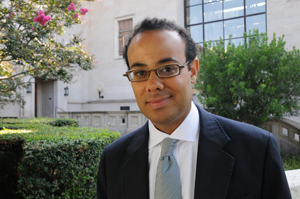 Justin Driver, Harry N. Wyatt Professor of Law at the University of Chicago Law School, will deliver a lecture titled “Free Speech in Public Schools: From Black Armbands to BONG HiTS FOR JESUS” on Oct. 26, 3 p.m., at Cartwright Hall, Room 213.

The lecture, which is part of the Drake Constitutional Law Center’s Distinguished Lecture Series, is free and open to the public.

Free speech in public schools has long been a topic of controversy. During the lecture, Driver will discuss this issue, citing two milestone cases for the First Amendment.

In the first, Tinker v. Des Moines Independent Community School District (the “black armband case”), students were suspended after wearing black armbands to school in 1965 to protest the Vietnam War. Dan Johnston, LW’64, defended the students before the U.S. Supreme Court, who ruled that students do not “shed their constitutional rights to freedom of speech or expression at the schoolhouse gate.”

In the second, Morse v. Frederick, student Joseph Frederick was suspended by his high school principal in 2002 after displaying a banner reading “BONG HiTS 4 JESUS” during the Olympic Torch Relay. The U.S. Supreme Court ruled 5-4 that the school officials did not violate Frederick’s First Amendment rights, given that the speech could be reasonably understood to promote illegal drugs.

“This is a unique opportunity to hear from one of the nation’s leading experts on the increasingly controversial topic of speech in public schools,” said Mark Kende, James Madison Chair in Constitutional Law and director of the Drake Constitutional Law Center. “It should be a great and timely presentation, especially considering Des Moines is at the center of this issue with the Tinker case.”

He also served as a law clerk to Judge Merrick B. Garland of the U.S. Court of Appeals for the District of Columbia Circuit, and Justice Sandra Day O’Connor and Justice Stephen Breyer of the U.S. Supreme Court.

Driver’s principal research interests include constitutional law, constitutional theory, and the intersection of race with legal institutions. He has been published in the Yale Law Journal, Columbia Law Review, Harvard Law Review, and more.

His article “The Constitutional Conservatism of the Warren Court” in the California Law Review was awarded the 2012 William Nelson Cromwell Article prize for the best article in American legal history published by an early career scholar.