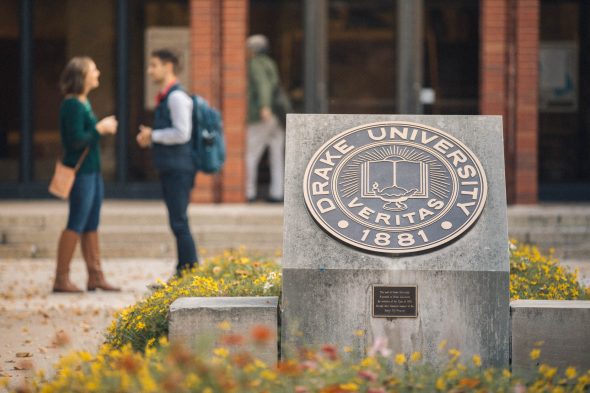 Drake University is one of the Midwest’s best universities, with an exceptional commitment to undergraduate teaching, according to U.S. News and World Report’s 2018 Best Colleges rankings released today.

“These rankings reflect Drake’s commitment to providing an exceptional learning environment, the quality of our academic programs, and the strength of our national reputation,” said Drake University President Marty Martin.

Drake received honors in a number of additional categories:

Regional universities, as categorized by U.S. News, are those which award both undergraduate and master’s degrees, with at least 50 percent of undergraduate degrees being awarded in liberal arts disciplines.

Also this week, College Factual, in partnership with USA Today, placed Drake within the top 5 percent of colleges and universities nationwide with the highest-paid journalism alumni, and the top 10 percent nationwide in 13 categories, including overall best in the Midwest (“The Plains States”); top-ranked business, management, and marketing programs; and highest-paid alumni in the fields of mathematics/statistics and education.

Other recent accolades include:

Drake University is a midsize, private university in Des Moines, Iowa, enrolling more than 3,200 undergraduate and 1,700 graduate students from approximately 40 states and 40 countries. Students choose from over 70 majors, minors, and concentrations and 20 graduate degrees offered through six colleges and schools. Drake students, faculty, and staff take advantage of the wealth of cultural, recreational, and business opportunities found in Iowa’s capital city. In return, Drake enriches the city through its own cultural offerings, considerable economic impact, and many service-learning endeavors, which channel the talent and energy of the Drake students toward meeting the needs of the community.