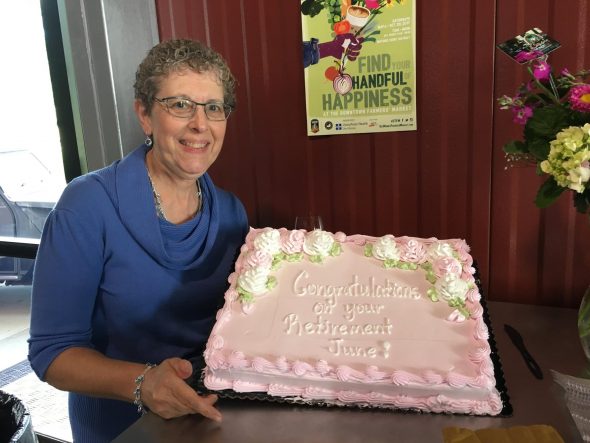 Professor of Pharmacy June Johnson has ended her 22-year Drake career, leaving behind a strong legacy.

Twenty-two years ago, June Johnson found what she describes as her “perfect fit”—all by pure luck. Johnson kicked off her pharmacy career in New York state, but in 1995 her path took a turn when she moved to Iowa for her husband’s educational pursuits. She described her apprehension of finding a fulfilling job in the Midwest. Her search was both quick and fruitful when a friend spotted an advertisement in a pharmacy newsletter for an open position at Drake.

“I’ve enjoyed it every day,” Johnson says. “The culture at Drake is one of excellence in teaching and there’s a lot of support for professors.”

It is that support that made her a fixture in the pharmacy program. She says Drake has an atmosphere that promotes innovation. New ideas for improvement within the department and classroom are encouraged and cultivated.

Johnson has thrived. She was one of the driving forces for the faculty mentorship program, which formally assigns new professors a mentor to visit their classrooms, help with test questions, encourage their involvement in service organizations, and make sure they are given the tools they need to be an excellent educator. She has also been a vocal supporter of the team-based learning method in pharmacy classrooms, where students are graded on both individual work and their work in small groups. This method has been shown to improve students’ ability to work in teams by intentionally putting them in a position where others rely on them. 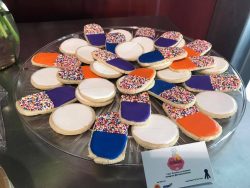 Johnson is most proud of the creation of Drake’s unique diabetes concentration.

“If I were to reflect, that would be my legacy,” she says. “It’s what I’ve been associated with the longest.”

Started in 2000 with the invaluable assistance of Dean Chesnut, the diabetes concentration was the only such program in the nation. It is intended to better prepare tomorrow’s professionals to better address the challenges of a growing health care area, and it’s been immensely popular with Drake students, with several hundred students completing it over the past 17 years.

Johnson’s work has not gone unnoticed. She has received honors and awards for her efforts within Drake and the community. She recently received Drake’s Granberg Professional Leadership Award. It makes a nice addition among her long list of honors, including the Drake Pharmacy Mentor of the Year title, 2005 Madelyn M. Levitt Distinguished Community Service award, 2017 IPA (Iowa Pharmacy Association) honorary president title, and her current position as president of the Central Region American Diabetes Association.

“I don’t know how she did it,” says Jamie Pitlick, one of Johnson’s students who went into diabetes patient care. “One of the things I remember the most is just how active she was.”

Johnson credits her passion for serving others to be her impetus for her work.

“For me, it’s all about giving back. Service is just part of my fabric,” she says. “We’re here on this earth to make the world a better place. It sounds really corny, but that’s how I feel. We all have an obligation to make the community healthier.”

While her commitment to service has spurred her into the community to educate and inform the public and professionals on diabetes specifically, it has also fed into her love of teaching. She feels that by investing in students, she is giving back.

“I enjoy being able to guide students and playing a small part in the career decisions they make. By doing this, I’m contributing in a small way to the social good,” she says. “My impact is being multiplied manifold by working with students.”

She approached her retirement with what she calls “positive anticipation.”

“I feel a mixture of excitement and a little trepidation,” Johnson says. “When you’ve done something you love for so long, it’s hard to imagine not doing it anymore.”

Huey named a fellow of the American College of Sports Medicine

Bulldogs on the Board