A new study demonstrates the substantial impact of Drake University and its alumni on the central Iowa economy. Drake University students, faculty, staff, and visitors drive more than $413 million in consumer spending annually in the greater Des Moines area, while more than 15,000 area alumni boost the regional GDP by about $2 billion, or 4 percent, according to the study by Impact DataSource of Austin, Texas.

The economic impact study—the first of its kind at Drake since 2008—quantifies the University’s direct and indirect effects on the central Iowa economy and workforce in the fiscal year based on its out-of-state draw and the tendency for students to remain in Iowa. Nearly 70 percent of Drake students come to Des Moines from outside of the state for college, and in the most recent graduating class, more than 50 percent remained in Iowa.

The findings for the fiscal year-ending June 30, 2016, reinforce Drake’s position as an anchor institution that contributes considerably to the central Iowa economy by fulfilling its educational mission, creating and sustaining jobs, importing skilled employees into the workforce, attracting visitors to the region, and generating tax revenue.

“As Des Moines continues to stand out in national rankings as a best place to live, work, and raise a family, this new economic impact data underscores Drake’s substantial contribution to the vitality of our hometown,” said Drake University President Marty Martin. “Drake University flourishes as an educational institution, a cultural hub, and an economic driver because of the robust partnerships that we maintain with individuals and organizations in Des Moines. As we continue to leverage our resources and expertise to serve the community, we’re proud that these partnerships continue to reap significant dividends for Drake and central Iowa.” 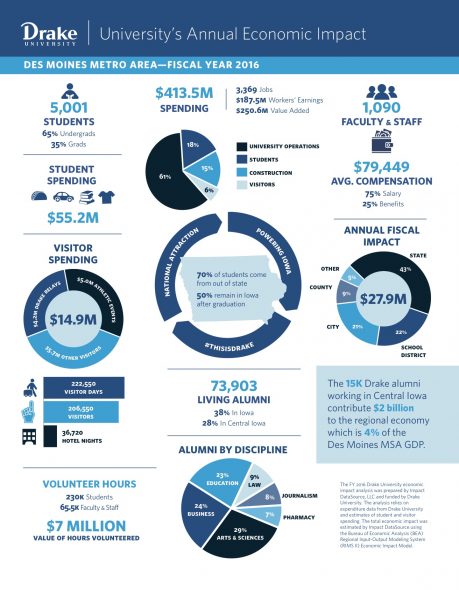 Among the report’s key findings:

Drake’s status as a “brain gain” institution—a net importer of students and skilled employees—boosts the regional economy by more than $2 billion.

Nearly 70 percent of Drake students come from outside the state—with only 19 percent coming from the Des Moines metro area—but more than half stay after graduating.

Drake supports 3,369 jobs and $187.5 million in workers’ earnings annually through its day-to-day operations, construction projects, and spending by students and visitors.

In 2015–2016 the University paid $86.6 million in compensation and benefits to its 1,080 employees. The University’s day-to-day operations supported another 591 indirect or “spin-off” jobs in Polk County. These tallies did not include student workers, who also earn an income from the University while studying here.

The University is also a considerable source of tax revenue, bolstering city, county, state, and local jurisdictions with $15.5 million in property taxes, $7.6 million in income taxes, $4.3 million in sales taxes, and $471,485 in hotel taxes in the 2015–2016 fiscal year.

“Drake alumni make a meaningful contribution all over the globe—but nowhere are their achievements more visible than in central Iowa, where they put their skills to work as corporate executives and nonprofit leaders, elected officials and court justices, public school superintendents, entrepreneurs; in short, in every aspect of business and society,” said John Smith, vice president for university advancement. “Des Moines is stronger for the thousands of Bulldogs who choose to call it home.”

The University’s broad range of academic, recruitment, and athletic programming attracts thousands of out-of-town visitors who spend $14.9 million and directly or indirectly contribute to $26.7 million in economic output for the region.

Drake students, faculty, and staff members give back to the local economy through community service and volunteerism.

The report also highlights student projects that directly benefit the community. Drake’s Next Course Food Recovery Network, for example, has recovered more than 10,000 pounds of food from the University’s dining halls and catering services and repurposed it for homeless shelters and other nonprofits. Additionally, pharmacy students provide 1,500 immunizations each school year for the local community, and School of Journalism and Mass Communication students provide professional consulting services to local non-profits each year.

The economic impact study comes on the heels of two studies released in 2015 by The Economist and the Brookings Institution which ranked Drake University highly in estimated economic value to students compared to other competitive options for college. Drake’s students earn higher median salaries than would be predicted based on measurable variables, and they exhibit above average performance in occupational earnings potential and federal loan repayment rates. As reviewed in the economic impact study, “Drake University clearly appears to provide an excellent opportunity for students to increase their future potential economic outcomes.”

Motherboard To Mortar Board