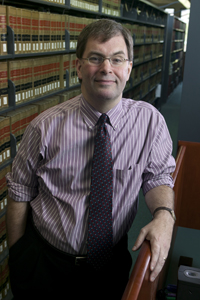 Professor Mark Kende has been in the news—a lot.

He has been featured in publications such as Fortune Magazine, USA Today, and The Washington Post, not to mention numerous Iowa newspapers and TV stations.

“I get asked questions about proposed policies and whether they’re constitutional or not,” Kende says. “Freedom of speech, freedom of religion, the treatment of immigrants—those are just some of the big questions right now.”

Kende’s interest in politics started young. He grew up in a family that openly talked about political issues, and his father was involved in Henry Wallace’s presidential campaign. As a teenager, Kende closely followed political events such as the Watergate scandal and the Vietnam War and became even more fascinated.

“It’s an incredibly gratifying area of law,” Kende says. “You might be representing a minority group, or an employee who has been illegally discharged and is trying to battle a major corporation. In those cases where you succeed, there’s a sense of accomplishment that you have made the world a bit more just.”

After five years of practice, Kende turned to his true calling: academia. He taught at various institutions and served as a Senior Fulbright Scholar in South Africa before joining Drake Law School’s faculty in 2004, where he was named director of the Drake Constitutional Law Center.

Created by Congress in 1987 and sponsored by U.S. Congressman Neal Smith, the Drake Constitutional Law Center is one of only four programs in the nation funded by the federal government to foster study of the U.S. Constitution. Each year, the center invites national experts to discuss current issues such as race, religion, war, and same-sex marriage.

“Over its history, the center has been able to bring the best people in the field to Iowa to share their ideas,” Kende says. “We try to invite speakers from different backgrounds and perspectives, both conservative and liberal, to speak on a variety of topics. It’s a really valuable experience for students.”

In addition to his work in the center, Kende is dedicated to his scholarship and has written two books on the South African constitution created after apartheid. He also gives talks around the United States as well as internationally. This summer, he will present at the University of Würzburg in Germany and at a conference in Budapest, Hungary.

However, Kende knows his role as media commentator won’t slow down anytime soon. He continues to get questions about recent legislation proposed in Iowa, and he is anticipating a media frenzy for U.S. Supreme Court nominee Neil Gorsuch’s confirmation hearings.

“I enjoy it,” Kende says of the media attention. “It’s rewarding, and I am hopefully providing a useful public service to help journalists and the community better understand the issues.”